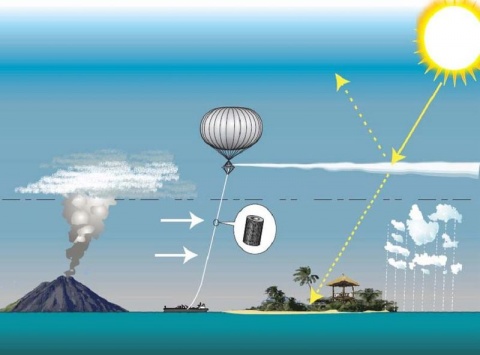 In response to reports that British scientists are about to test the hardware needed to put sulphur particles in the stratosphere as a climate technofix, international technology watchdog ETC Group is calling on the UK government to halt the controversial test and respect UN processes underway to discuss these issues.

Scientists at Cambridge University (collaborating with Oxford and the Hadley Centre in a project run by the University of Bristol) have been engineering a hose to the sky that will be held up by a giant balloon. The purpose of the hose is to deliver particles to the stratosphere as a way of blocking sunlight, in order to disguise the effects of global warming. The test, expected to take place in October or November, will use a large helium balloon to loft a kilometer-long prototype hose to the sky and then spray water through the hose (a substitute for the chemicals it is ultimately designed to deliver).  The experiment is part of a £1.6 million research project entitled SPICE (Stratospheric Particle Injection for Climate Engineering), funded by the Engineering and Physical Sciences Research Council. The SPICE researchers have not disclosed exactly where or when the controversial experiment will take place.

“Going ahead with this experiment will do real damage to the UK’s – and Europe’s -- credibility in climate negotiations later this year in Durban, as well as next year’s Earth Summit in Rio de Janeiro,” said Pat Mooney, Executive Director of ETC Group from Ottawa.  “By allowing this experiment to go forward the UK is undermining intergovernmental discussions on geoengineering that it has financially supported and is very actively participating in. This extremely unhelpful provocation will sour UN negotiations. The UK Government must halt this experiment now and clearly state that it will not support any geoengineering experiments while international talks are ongoing.  I will be raising these issues with governments, Parliamentarians and civil society groups next week in Bonn and Brussels in our discussions to prepare for Rio2012.”