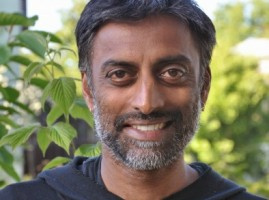 Gopal has been involved in fighting for social, economic, environmental and racial justice through organizing & campaigning, teaching, writing, speaking and direct action since the late 1980’s. He is a co-founder of Movement Generation: Justice and Ecology Project, which inspires and engages in transformative action towards the liberation and restoration of land, labor, and culture. MG is rooted in vibrant social movements led by low-income communities and communities of color committed to a Just Transition away from profit and pollution and towards healthy, resilient and life-affirming local economies. MG is a founding member of the Climate Justice Alliance. He has served on the staff-collective and is now a member of the Planning Committee.

Currently, Gopal supports movement building through his work with organizations including The Climate Justice Alliance, ETCgroup, and the Center for Story-based Strategy. He is also a Fellow with the Center for Economic Democracy. Gopal teaches in the Masters of Arts in Urban Sustainability program where he teaches Ecological Systems Thinking, in the undergraduate program at Antioch University in Los Angeles; and at San Francisco State University in the Race and Resistance Studies program.

Gopal is a trainer with the The Ruckus Society and serves on the boards of The Center for Story-based Strategy, The Working World, and Occidental Arts and Ecology Center. He is also on the advisory boards of the Catalyst Project and The Sustainable Economies Law Center. Gopal works at the intersection of ecology, economy and empire.

Gopal has been a campaigner for Silicon Valley Toxics Coalition on human rights and environmental justice in the high-tech industry and the Oil Campaigner for Project Underground, a human and environmental rights organization that supported communities resisting oil and mining exploitation around the world. He has been active in many people powered direct action movements, including the Global Justice/Anti-Globalization Movement, Direct Action to Stop the War, the Climate Justice movement, Take Back the Land, Occupy and as an ally with Black Lives Matter and Indigenous solidarity struggles.

Gopal was an elementary and early childhood educator, working formerly as a teacher and also as the co-director of the Tenderloin Childcare Center, a community based childcare center supporting children and families forced into homelessness. He has worked in teacher education and education organizing in the US and in India.

Most importantly, Gopal is the parent of two amazing young rabble-rouser. He lives in Oakland in an intentional, multi-generational social justice community of nine adults, eight children and a bunch of chickens.