Explaining competing claims of 70% vs. 30% and why it matters 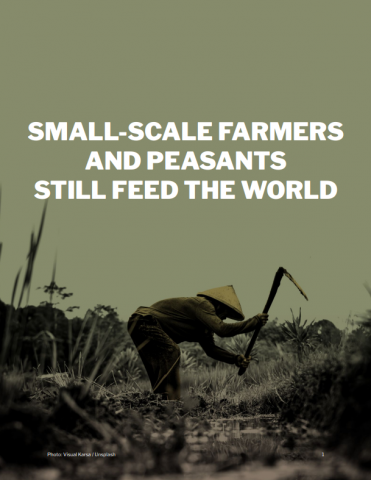 A debate has emerged as to what proportion of the global food supply is produced by small-scale food producers - one that may have big implications for policy-making addressing hunger. Civil society organisations and peasant movements have estimated that around 70% of the world is fed by small-scale farmers and other peasants. However, two recent academic papers are claiming that small farm producers really only feed about one third of the world’s population. Significantly, one of these new papers is authored by the UN’s food agency which is advising a policy shift toward more support for big farms.

The two studies are:

A closer look at these papers (below) strongly suggests they should not be relied upon to guide changes in policy. Concerns include:

1.     Both studies only measure agricultural production which is an inaccurate way to understand who feeds the world (a matter of  consumption, not production). They claim to debunk the 70% estimate while mis-characterising what it describes.

2.     Both studies miss a large amount of the food that is actually consumed – especially food consumed by poorer people and peasants.

4.     Both studies significantly limit how they define a “small farmer”  to two hectares while also excluding other peasants and small producers from their calculations.

5.     One study (Ricciardi et al.) introduces significant geographical bias, excluding data from exactly the regions with the most peasants and small farmers.
This briefing provides a background to this dispute, explains why it matters and describes ways in which these two studies miss the mark in illuminating who really feeds the world.