As big oil states plan to promote energy-hungry agtech as a ’climate solution’ at COP26, it’s time to question their AIM 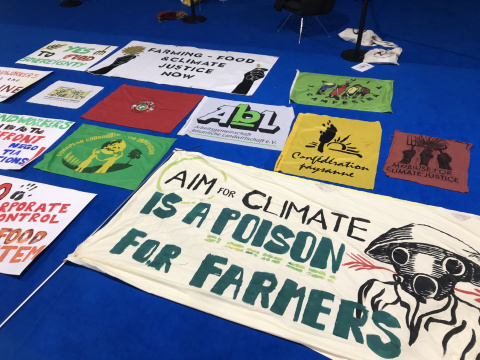 The USA and the United Arab Emirates both have vested interests in finding ways to justify continuing to extract and sell their vast supplies of oil. It is perhaps not coincidental then, that these two countries are planning a high-profile launch for what is likely to become a controversial climate and agtech initiative, “Agriculture Innovation Mission for Climate (AIM4C)”, at UNFCCC’s COP26 in Glasgow in November.

The spurious premise that underpins AIM4C is that, in order to turn current industrial agriculture - a huge climate problem - into a future climate solution, the world just needs to add tech - that is, massive public, private and philanthropic investment into new, corporate-controlled technologies, including so-called climate-smart agriculture. With significant geopolitical wind beneath its wings, this initiative has the potential to both hand the tech titans a new investment bubble and remake big food’s image as “techno-climate champions”. Meanwhile, by linking ‘climate smart agriculture’ and flashy hi-tech to the carbon market, AIM4C could facilitate land grabs and reward oil rich countries with agricultural carbon credits to justify continued fossil fuel production, all while enriching tech industries now positioning themselves at the cutting edge of industrialized food production.

Previewed by President Biden at his Leaders Summit on Climate six months ago, AIM4C has received endorsements from both the Bill and Melinda Gates Foundation and Qu Dongyu, the chief of the UN Food and Agriculture Organization, at the UN Food Systems Summit 2021. It has been supported by the UK’s COP26 Presidency and around 30 countries have now signed up as partners¹. The problem is that at its core, AIM for Climate is designed to attract climate change finance to prop up industrial agriculture sectors, it is not intended to keep fossil fuels in the ground, nor support proven low-tech agroecology practices - the most reliable recipe to reduce carbon emissions.

Petrostates lead the way
No petro-state exemplifies extravagant fossil energy use quite like the United Arab Emirates (UAE). From Ski Dubai’s 85 meter artificial snow mountain to extensive air conditioned malls and resorts, the desert kingdom is not slashing its carbon emissions any time soon. Maintaining food supplies in the desert is challenging, and so the UAE also pours its oil wealth and energy resources into importing over 90% of its food - a situation as far away as is imaginable from the visions of ‘food sovereignty’ and ‘climate justice’ that social movements are so urgently calling for.

While the US Government's role in driving high tech and climate smart agriculture may be unsurprising, the role of UAE as lead partner should not be underestimated. As a desert country with significant fossil fuel interests, UAE has years’ of experience in navigating the contradiction between climate risk to food systems and its core economic interests. For some time, it has been betting heavily on agtech, and applying technology to secure its interests in global food chains. Relying so heavily on imported food means that the UAE’s investments in drones, vertical farms, digital agriculture, alternative protein production and biotech to increase food production in the Emirates might seem understandable, yet its agenda is no less dangerous than that of the US.

Launched in May 2021, UAE’s ‘Food Tech Valley’ development in Dubai is the poster-child for this aggressive agtech investment. It aims to triple the Emirates food production and make the food tech ‘smart city’ a global destination for start-ups and agtech firms. The UAE Ambassador to Canada described it as “an integrated modern city that develops alternative proteins, creates drought-resistant crops, and uses 3D technology and robots to help sustain food production, create superfoods and provide answers to global food challenges”.

AIMing for a make-over?
AIM4C arises just as more and more climate activists and policymakers are recognizing that the industrial food chain - from fossil-based agrochemicals to methane-belching feedlots and monoculture land clearance - is a major barrier to climate justice; one that needs dismantling. AIM4C is designed to assuage and divert this rising tide of concern by dressing up industrial agriculture as a newly tricked-out climate hero using a dazzling array of high tech tools, to rescue global food systems from climate collapse.

That may sound appealing to tech bros but when it comes to meaningful climate action, AIM4Climate is a red-herring that puts even more power into the hands of private investors and the giants of agribusiness. In doing so, it diverts resources away from grassroots-led agroecology and food sovereignty initiatives, approaches that are proven to reduce emissions and give communities control over their food, lands and livelihoods.

Climate costs of digital agriculture
AIM4C is intended to usher in a new era of ‘climate smart agriculture’ involving ‘precision farming ’. In theory, this means crops would be continuously monitored with sensors and satellite images, allowing AI tools in the cloud to tell farmers how much pesticide and fertilizer to use via a continuous stream of real time data. Its proponents claim such data- driven farming would reduce the use of pesticides and fertilizers, enable decisions that increase carbon sequestration in soil and thereby lead to significant reductions in the amount of carbon emissions overall caused by agriculture. As with previous claims made for genetically modified (GM) crops or biofuels, such smooth promises neatly airbrush out the real energy, resource and social costs of transforming to a digital food system.

The simple fact is that storing and transmitting data requires massive amounts of energy . resulting in carbon emissions. And as big data goes, agricultural data is particularly large (and energy hungry) data indeed. Bayer (who gobbled up Monsanto) boasts that it currently has over 69 billion data points for its digital farming app. It has been estimated by Bayer that its sensors on harvest equipment collect up to 7GB of data per acre from digital platforms. A back of the envelope calculation would suggest that collecting data from corn fields in the US alone would expend 3.3 billion kilowatt hours of energy (that is 3.3 terawatt hours) – approximately the annual electricity consumption of a west African nation like Senegal. Since rural areas require high energy 5G and wireless systems and involve further miles to carry data – probably this estimate is far too low.

In addition to the costs of collecting the data, analyzing this data using AI is costly. For energy. Wired Magazine recently reported that using machine learning to teach a robotic hand to manipulate a rubiks cube puzzle required more than 1,000 desktop computers plus a dozen machines running specialized graphics chips crunching intensive calculations for several months and may have consumed about 2.8 gigawatt-hours of electricity roughly equal to the output of three nuclear power plants for an hour. Digital agriculture would involve teaching AI and robots to identify crops in all states of growth and disease, pick, spray, weed, pack, track, milk and manipulate crops and livestock, tasks that are far more complex and variable than manipulating a rubix cube.

Controlling data, controlling farms
The digital farming approach defaults to digital control and decision making in farming, which impacts every aspect of the food chain. It allows data giants and web services companies ever more control, as they can use the information from sensors on farms to guide farmers’ decisions about their crops, and may sell that data to traders and giant asset managers, such as Blackrock, who can use it to invest in the most profitable crops.

Increased mechanization and digitalization raises huge concerns for labour and agricultural workers. The future that AIM4C promotes looks a lot like farms without farmers, and certainly without farm labourers. Similar to Amazon’s warehouses, the digitalization that has already taken place on farms forces workers to work faster and harder than before. Or simply replaces them. With AIM4C’s investment in precision agriculture, we can expect that the human role in agriculture will become even more tightly tracked and controlled, conditions that in other industries have been linked with ever lower wages, precarious work conditions and high rates of injuries and deaths.

Engineering the illusion of carbon sequestration
Part of the hype around ‘climate smart agriculture’ involves certain techniques or genetically engineering plants that may capture and store additional carbon in the soil. This claim is another dangerous distraction, based on the questionable assumption that certain crops can lock large amounts of carbon in the soil over the long term. In fact, there is now increasing evidence that the amount of carbon the soil can store is limited and only is stored temporarily.

More than climate concerns AIM4C’s backers want the initiative to become integrated into the global carbon market. A direct effect of this will be to incentivise agribusiness ito cultivate huge monocultures of digitized climate smart crops in order to make money by selling carbon credits. This will require ever greater expanses of land, which could lead to more land being unlawfully grabbed from small-scale farmers and forest-dwelling communities as industrial farms compete to sell potentially valuable carbon credits.

By genetically engineering ‘designer’ crops or sprays that can, theoretically, store more carbon, agribusinesses would stand to gain even more control over seeds , chemicals and other biological resources, by giving rights and patents to transnational corporations. Yet it is the practices of such firms and their associates, which use genetic modification to increase genetic uniformity, that has resulted in the increased use of agrotoxins, and has destroyed soils and biodiversity. Already, these practices have led to the emergence of superweeds that can choke out farmers’ livelihoods. If realised, the AIM4C vision would likely threaten the food security of already vulnerable communities, both locally and globally.

At the heart of AIM4C is a high-stakes gamble to delay real reductions in the production and burning of fossil fuels, and a bid to profit from the climate crisis. Rather than using investment to pursue practices that genuinely reduce emissions and our dependence on fossil fuels. Like previous biofuel boosterism AIM4C is exploiting the climate emergency to fortify agribusiness interests - in the UAE , the USA and beyond - that promise to transform our global food systems through control, and push them in a direction that would lead to disaster for our climate, and for us all.

Investing in agroecology, food sovereignty and small scale farmers on the other hand, can maximize the earth’s limited capacity to store carbon in soil without the massive additional energy inputs required by digital agriculture. Transitioning industrial agriculture to agroecological farming is a much more viable path for reducing emissions caused by agriculture.