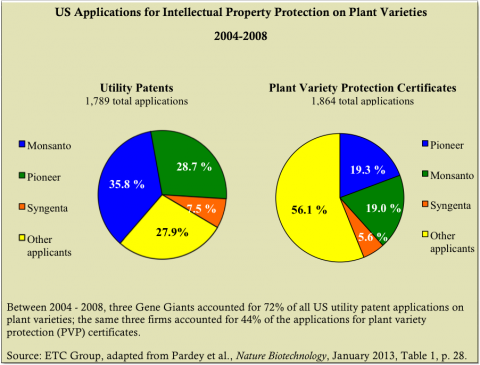 “The notion that farmers in the South will benefit from post-patent GE seeds is patently absurd,” said Silvia Ribeiro, ETC’s Latin America Director. “Under the guise of charity, the Gene Giants are devising new schemes to soften opposition to transgenics and reach new markets. In reality, the Gene Giants don’t have the capacity or the interest to supply the diversity needed in sustainable farming systems or to meet the urgent need for locally adapted varieties, especially in the face of climate change,” said Ribeiro.

In the face of soon-to-expire patents on a handful of biotech traits, the big-hearted Gene Giants claim they are making it possible to gain access to generic biotech traits through a legally-binding “accord.” The deal, which was originally drafted by Monsanto, encompasses two agreements that lay out the rules for access to generic biotech traits at patent expiration. According to ETC Group, the contracts will ultimately control the terms of access to expired traits and reinforce market power among a handful of giant seed companies.

To read the full press release, please download the PDF.