Shock and Thaw? Civil Society says “No” as geo-engineers mount shock bid to hack the planet. 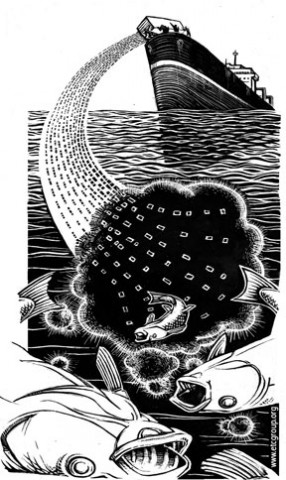 OTTAWA, Canada –More than 80 civil society organizations (CSOs) from 20 countries sent a sharp message to scientists meeting in Copenhagen, by releasing a joint statement initiated at the World Social Forum in Belém, Brazil:  “The Better World we seek is not Geo-engineered.” The statement is being released as a small group of scientists, using a high-profile platform at a climate-science meeting in Copenhagen1 , are ratcheting up pressure on governments to support and fund real world geo-engineering experiments.  ETC Group, a Canadian-based international CSO, is releasing the statement, which focuses on ocean fertilization, one of the most controversial geo-engineering technologies. The groups assert that “Ocean fertilization and other unjust and high risk geo-engineering schemes are the wrong answer to the challenge of global climate change.”

“At the Social Forum,” says Silvia Ribeiro of ETC Group in Mexico, “everyone was concerned about two ocean fertilization experiments that were about to violate the UN Convention on Biological Diversity’s de facto moratorium. One was a joint German/Indian iron dump in the Scotia Sea [codenamed LOHAFEX] and the other is a proposal to spread urea in the Tasman Sea [spearheaded by Ian S.F. Jones, who is participating on the geo-engineering panel in Copenhagen Wednesday morning]. The LOHAFEX initiative was opposed by Germany's Minister of the Environment but went ahead anyway.  The renegade ship [RV Polarstern] is expected to dock in Punta Arena, Chile, on March 17 and the joint statement is open for signatures until that date.”

“The Copenhagen meeting represents a major bid by geo-engineers to move from the fringes of scientific enquiry into the mainstream and thereby to pressure governments to fund their experiments,” adds Diana Bronson from ETC Group's Montreal office. “The scientists are trying to sound reasonable, ” Bronson continues, “by saying that governments must still cut back on GHG emissions and geo-engineering should only be a ‘Plan B.’ However, in Copenhagen, they will insist that the climate is already at the ‘tipping point’ and that governments would be foolhardy not to explore other technological solutions.”