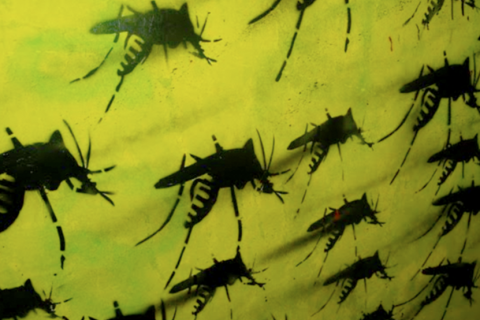 JULY 8, 2019, MONTREAL–In a report released today, ETC Group exposes serious bias and conflicts of interest among members of an “expert” panel convened by the highly influential International Union for the Conservation of Nature (IUCN), the largest international body that convenes conservation movements.

Gene drive organisms, one of the main subjects of the report, are a powerful new technology being used as part of attempts to drive natural populations, and potentially entire species, extinct using genetic engineering. Gene drives have so far been developed mostly in insects and mammals. This extinction technology has the potential to accelerate ecological collapse in insects and many other sexually reproducing species. 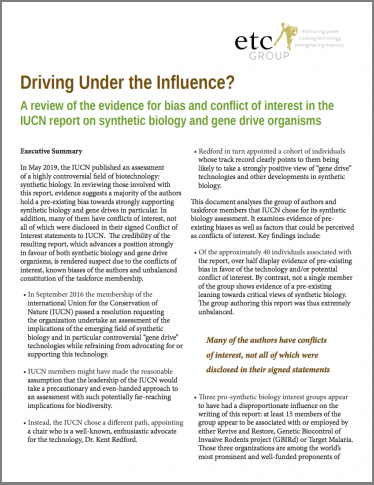 “With 40% of insect species already in decline, it is beyond comprehension that one of the largest and oldest conservation bodies in the world is clearing the way to actively supporting such a deliberate extinction technology,” said Jim Thomas, Co-Executive Director of ETC Group.

“It is unacceptable that the IUCN allowed gene drive proponents to successfully dominate the writing of this report.”

The IUCN report’s conclusions suggest that this extinction technology has a potential use in conservation. Given the bias among authors and the serious shortcomings in the group charged with compiling this report, detailed below, the IUCN’s membership should reject the report.

“This report provides a skewed perspective from a group aligned with the viewpoint of the biotechnology industry, which is inadequate to inform future policy discussions in the precautionary manner expected of IUCN,” said Thomas.

“The process was so unbalanced that a further report and process should now be required before establishing an IUCN policy on synthetic biology. A new report must draw upon a more carefully constituted balance of authors and perspectives and more rigorously address conflicts of interest.”