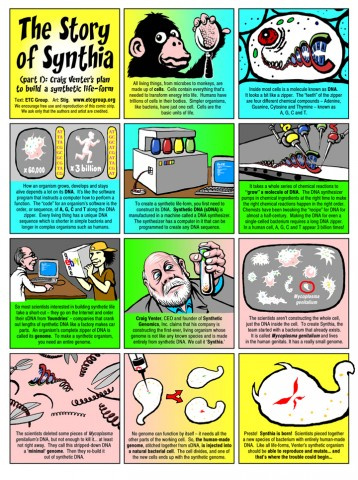 The Venter Institute - named for its founder and CEO, J. Craig Venter, the scientist who led the private sector race to map the Human Genome - is applying for worldwide patents on what they refer to as "Mycoplasma laboratorium." In the tradition of 'Dolly,' ETC has nicknamed this synthetic organism (or 'syn') 'Synthia.'

"Synthia may not be as cuddly as a cloned lamb, but we believe this is a much bigger deal," explains Jim Thomas of ETC Group, a civil society organization that is calling on the world's patent offices to reject the applications. "These monopoly claims signal the start of a high-stakes commercial race to synthesize and privatize synthetic life forms. Will Venter's company become the 'Microbesoft' of synthetic biology?" asks Jim Thomas.

"For the first time, God has competition," adds Pat Mooney of ETC Group. "Venter and his colleagues have breached a societal boundary, and the public hasn't even had a chance to debate the far-reaching social, ethical and environmental implications of synthetic life," said Mooney.

In Vivo, In Vitro, In-Venter? Published on May 31, 2007, the Venter Institute's US Patent application (number 20070122826) claims exclusive ownership of a set of essential genes and a synthetic "free-living organism that can grow and replicate" that is made using those genes. The Venter Institute has also filed an international patent application at the World Intellectual Property Organization (WIPO number WO2007047148, published April 27, 2007) which names more than 100 countries where it may seek monopoly patents.

Pandora pending: Patent experts consulted by ETC Group indicate that, based on the language used in the application, the Venter Institute researchers had probably not achieved a fully-functioning organism at the time of the filing (October 12, 2006).