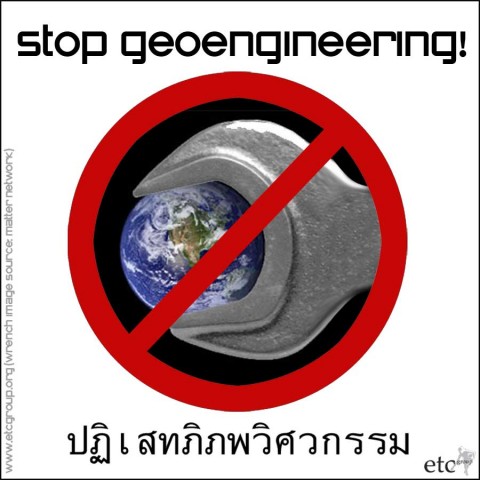 The RV Polarstern, a German research vessel owned by the Alfred Wegener Institute for Polar and Marine Research of Bremerhaven, Germany, left Cape Town on 7th January 2009 to begin a large scale geo-engineering experiment known as LOHAFEX. The LOHAFEX voyage, approved by the Indian and German governments according to Dr. Victor Smetacek, co-Chief Scientist of the expedition, proposes to dump iron sulphate particles over 300 square kilometres of open ocean in the Scotia Sea close to Antarctica.1 The team aims to provoke a plankton bloom so massive it will be visible from space. The hope is that “fertilizing” the ocean with iron will result in carbon sequestration, and prove to be a quick fix for climate change. Earlier experiments with ocean fertilization have not shown this to be the case.

In 2008, both the UN Convention on Biological Diversity (CBD) and the London Convention of the International Maritime Organisation – the treaty that governs the dumping of wastes at sea – enacted a global moratorium on ocean fertilization activities because of the ecological risks to the oceans and climate.2 Civil society groups are now calling on the German and Indian governments to respect the international moratorium on ocean fertilization and to recall LOHAFEX, the third Antarctic iron dumping expedition led by Germany's Alfred Wegener Institute since 2000.

“If the LOHAFEX iron dump goes ahead, it will be a clear defiance of the UN Convention on Biological Diversity,” warns Jim Thomas of ETC Group, an international advocacy organisation that played a key role in securing that moratorium. “It is particularly shocking that Germany, the current chair of that convention, should be the country breaking the agreement. The artificial plankton bloom may be visible from space, but it seems it's not visible from Berlin!”
Related Issues:
Climate & Geoengineering
Related Fora:
Biodiversity: CBD, SBSTTA, IPBES