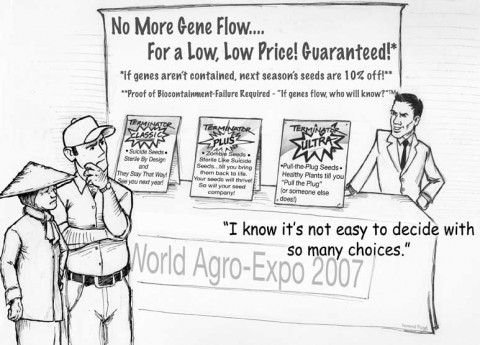 ETC Group reported on a patent application(1) under examination at the US Patent & Trademark Office (USPTO) in which Siegers Seed Company of Holland, Michigan, claimed invention of a “warted pumpkin...wherein the outer shell includes at least one wart...” On February 13 2009, the USPTO put its 9-page verdict in the mail(2) rejecting all of the application's 25 claims.

“The good news is that the USPTO rejected all claims in the warty pumpkin patent application,” says Silvia Ribeiro from ETC Group's Mexico office. “And also that in her decision, the patent examiner cited a catalogue from Seed Savers Exchange – a non-profit organization that preserves and distributes heirloom seeds. Seed catalogue entries demonstrated the pre-existence of warty pumpkins well before Siegers Seed's so-called invention. Thousands of years before that of course, indigenous peoples domesticated pumpkins and, no doubt, there have been bumpy ones since then.”

“The bad news,” says ETC's Kathy Jo Wetter, “is that the USPTO's rejection is 'non-final,' which means the applicant can make amendments to the claims and try for a monopoly patent again.”

It can take years for a “non-final rejection” to become final. In the reexamination of the Enola bean patent (U.S. patent 5,894,079, granted in 1999, which claimed a bean variety of Mexican origin), the USTPO's rejection remained in non-final limbo for one and a half years (December 2003-April 2005) before the Office issued the first of two “final” rejections. The patent owner appealed the ruling and the patent is still under dispute(3) so farmers in Mexico and bean sellers north and south of the border continue to be shut out of markets.