The Artificial Intelligence of Geoengineering 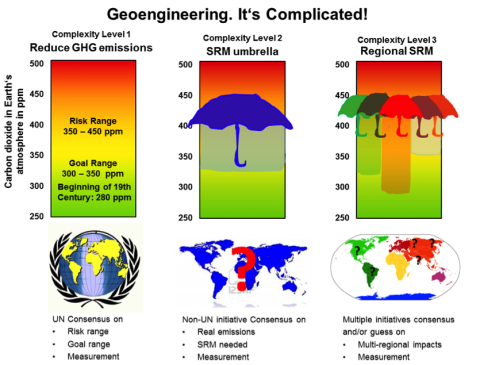 Chaos theory proposes that a butterfly flapping its wings in Brazil could cause a hurricane in Texas. Complexity theory compounds the chaos by adding the quantum-like effects of, for example, genome changes in the butterfly to the conflictions of supercomputer models. Now, geoengineers want to multiply the complexity with politics. The result is an extreme form of artificial intelligence.

Gaia is complicated. From stratospheric currents to undersea rivers – and from plankton to palm tree emissions and sequestrations – quantifying, qualifying and calibrating planetary systems is at least as challenging as understanding genes or neurons. Despite decades of modeling, we are no more likely to predict next month’s best picnic day than we are to anticipate the proclivities of our DNA or to trace a memory in our cranium. Frustratingly, we have learned to map and manipulate genomes, geographies and memories, but we can’t control the consequences.

The distinction between accurate manipulation and accurate modeling is vital. Scientists and governments do need a much better understanding of what we are doing to ourselves. Reducing GHG emissions is complicated. Not reducing emissions is more complicated. Moving perhaps a billion people from coastal plains to higher ground will be complicated. Responding to extreme hydro-thermal events (floods, droughts, hurricanes, etc.) will be incredibly difficult. Sorting out correctly which crops can grow where around the planet will be hugely critical and hugely complex. That all of these decisions will also be political compounds the problem. Every political opinion will claim “sound science” as its basis. As we have seen through Copenhagen, Cancun, Durban and Doha, truth and transparency are already the victims of irresponsible climate change negotiations. Now, geoengineers are saying that they can help governments address climate change by manipulating planetary systems. This increases the complexity by several orders of magnitude and renders the politics of climate governance still more opaque.

To read the full Communiqué, please download the pdf.