A Bittersweet Bargain on Biodiversity

Despite some small victories, the critical principles of justice and precaution lost ground at COP 15 of the Convention on Biodiversity (CBD), as business, billionaires and biotech-backers brokered a deal for biodiversity that would work in their interest 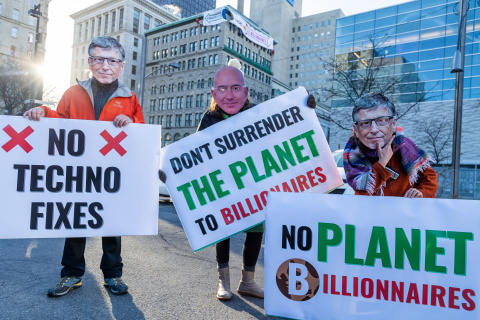 Two years late – and supersized beyond any previous CBD meeting – COP 15 was always going to be a complex multidimensional chess battle. Once all sides met in Montreal’s enormous Palais des congrès, an army of corporate and philanthrocapitalist lobbyists and big delegations from biotech-friendly governments used their superior numbers to drown out (and often literally edit out) long-standing principles of precaution and justice. Hovering over the entire proceedings were actors such as World Economic Forum (WEF) members, the Bezos Earth Fund (BEF) and other funds from billonnaires – because ultimately this was a COP where most points were about money.

However, at dawn on Monday 19 December, when the negotiations on a much touted ‘deal for nature’ ended, there were still a few jewels to be thankful for. But these are mixed in with other toxic text, which threatens the future of biodiversity policy-making in the UN.

Synthetic biology: horizon scanning, assessment and monitoring gets underway (but only just)

Like many of our allies, ETC Group came to Montreal hopeful that the decision already made in COP 14, to establish a regular and broad process for the Horizon Scanning, Assessment and Monitoring of developments in synthetic biology would finally be enacted. And it was – but barely. The governments of Brazil, Argentina and a few African states (swayed by Gates Foundation lobbyists) insisted that what was supposed to be a ‘regular’ process, should only be allowed to complete one two-year cycle for now. They also tried to turn a ‘broad’ process, meant to encompass Indigenous, farmer and other types of knowledge into a narrow “bioscience experts only” shop.

Luckily, they didn’t quite succeed in their ambitions to narrow the text in this way. It was agreed to establish a “multidisciplinary” expert group drawing on “expertise from a broad range of scientific disciplines, as well as interdisciplinary and intercultural expertise, Indigenous peoples and local communities.”.

However, delegates from Brazil and Argentina did manage to insert last minute text insisting that the start of such a horizon-scanning process should not be seen as a precedent for its continuation. They then boasted that they hope to kill off the process by the time COP 17 rolls around, setting the stage for many more fights to come.

Some steps forward for food systems: Agroecology makes it into the Global Biodiversity Framework, along with ambitions to halve pesticide risks and food waste

With industrial agriculture recognised as a major driver of biodiversity loss, many delegations stepped forward to insist on language promoting the importance of agroecology. The agribusiness-friendly governments of Brazil and Argentina again played bad guys in an attempt to cut references to agroecology from Target 10 of the Global Biodiversity Framework (GBF), insisting that such references be ‘balanced’ by a long and ugly list of industrial agriculture approaches.

In the end, ‘agroecological approaches‘ survived in Target 10. But, like a spoiled child, the Brazilian government would only allow it if its own preferred industrial ag buzzword, “sustainable intensification”, was allowed prime spot in the text before agroecology. The room gave in to Brazil’s tantrum, but at least agroecology survived.

Elsewhere in the text of the GBF, Target 7 sets the goal of “reducing the overall risk from pesticides and highly hazardous chemicals by at least half” and Target 16 hopes for “halving global food waste” - both goals that might be best met by moving away from the industrial food chain.

Since 2008, the CBD has agreed to two de facto moratoriums against the deployment of climate manipulation techniques (geoengineering). At the beginning of COP 15, over 90 civil society and Indigenous organizations signed a letter asking COP 15 to strengthen precaution in light of the fact that several governments and private actors are pushing for and investing in geoengineering research and open-air experiments. Supporters of geoengineering attempted to introduce text promoting it in the GBF targets, but this was successfully removed, a few days after the letter was circulated. You can read the letter at https://www.etcgroup.org/content/no-climate-geoengineering-open-call-cbd-parties-and-cbd-secretariat

In parallel, the COP 15 discussions on biodiversity and climate were stalled by a heated discussion about the possible use of the term “nature-based solutions” instead of “ecosystem approaches”, which is more commonly used in the CBD. After much discussion, it was decided to postpone a new resolution on biodiversity and climate change, pending consultations with all CBD Parties before the next SBSTTA meeting in 2023. Civil society is watching!

Just as climate negotiations have been badly skewed by the problematic notion of “net zero”, business lobbies such as the World Economic Forum and business-friendly NGOs such as the World Wide Fund for Nature (WWF) tried hard to insert the language of “Nature Positive” into the GBF text. But the “nature positive”  frame views earth’s complex systems through an accountant’s lens and biodiversity loss in one area can be “off-set” by biodiversity gains in another area (even though the context may be completely different and can include many accounting loopholes). “Nature positive” language was also plastered on exhibits and artwork all over the Palais des congrès, but in the end it was recognised for the empty corporate buzzword that it is and got kicked out of the text at the last minute. A welcome win for common sense!

While a start to a Horizon Scanning, Assessment and Monitoring process was established for developments in synthetic biology, it was also expected that new agreements to establish regional technology centers would support such horizon scanning activities – even beyond synthetic biology. Civil society, young and old, sang a version of Jimmy Cliff’s reggae classic “I can see clearly [with horizon scanning]” in the halls and handed out sleep-masks that read ‘Don’t Blindfold the CBD – support Horizon Scanning, Assessment and Monitoring” to encourage the delegates.

However, while a few delegates probably found the sleep masks useful as negotiations dragged on into the night, they didn’t heed the warning. Language on horizon scanning was edited out of the decision on Technology Co-operation as the parties wilfully blindfolded each other from seeing new technological threats on the horizon.

Editing out precaution and shoehorning in “technology and innovation”

Target 17 of the Global Biodiversity Framework was supposed to expand the CBD’s precautionary work on regulation and its oversight of biotechnology. In the end the target was cut down to an anemic paragraph that said almost nothing, while giving countries cover to apply Global Environment Facility (GEF) funds for the purposes of either assessing or promoting biotech. Most shockingly, pro-biotech governments successfully removed any and all direct references to the “precautionary principle” or “precautionary approach” throughout the GBF (there is an indirect reference via the Rio principles) – while peppering the text with exhortations to promote “science, technology and innovation”. This was exactly in line with the biotech and agribusiness strategy to attempt to establish a made-up “innovation principle” (basically an “anything goes” principle) to usurp the role of the precautionary principle.

Throughout the COP, biotech and business lobbies were busy acting in the margins and  impacting the text indirectly. The lobbyists of Target Malaria – the multimillion dollar Gates-funded project to release gene drives in Africa – boasted about funding “engagement” activities with some key Indigenous participants. Target Malaria also attempted to establish a new “academic and research” major group so they could commandeer a seat as a major group in the negotiations. The same biotech lobbyist who leads the Target Malaria academic and research putsch later sat at an Indigenous People’s microphones and seized the mic from them at plenary (see https://twitter.com/JimETC/status/1604338355549769728) – all while boasting on her T-shirt their close ties with the Argentinian negotiators who led the push on biotech (see https://twitter.com/thedelpho/status/1604249108830633984). Most concerning was the way in which increased Gates Foundation funding for African negotiators seems to have persuaded several African governments to back Brazil's push to remove the precautionary language that the Africa Group had always previously fought to protect.

As the high level segment got underway, ETC Group collaborated with activists from the local Quebec network, Vigilance OGM, to hang an 80 foot banner opposite the venue, reading “biodiversity versus billionaires”. The banner drew attention to the impact of Gates Foundation money on the COP, and to a philanthrocapitalist newcomer: the Bezos Earth Fund. This 10 billion dollar fund, set up by Jeff Bezos (founder of Amazon.com) did not even exist at COP 14, but is now positioning itself to be the sugar-daddy of the climate and conservation movement, buying big green groups and presiding over a problematic new CBD ‘Food Day’ made up of agribusiness and friends. When Bezos Earth Fund CEO Andrew Steer gave a speech, activists in Jeff Bezos masks calmly stood up in front of Steer with a sign reading “The Wrong Amazon is Burning".

Financialisation and privatisation of nature gets the green light

In the end, the biggest fight at COP 15 was over the one key factor that was present throughout the entire proceedings: money. To secure new biodiversity funding, the Brazilian government delegates led a walk-out of negotiations that captured headlines (but unfortunately, in reality, Brazil actually kept on negotiating at other items to promote biotech interests). The plan is that the new funding will explicitly open the door to large infusions of private capital that will let large corporate and philanthropic donors further influence biodiversity policymaking.

Even more concerning is the final Global Biodiversity Framework text, which welcomes the development of speculative financial instruments and approaches including “blended finance”, “payment for ecosystem services, green bonds, biodiversity offsets and credits, benefit-sharing mechanisms” – a corporate wishlist to commodify nature that could have been written by the Fortune 500 members of the World Economic Forum – and probably was.