Big Ag Mega-Mergers in Play; Dow + Dupont in the Pocket? Next: Demonsanto? 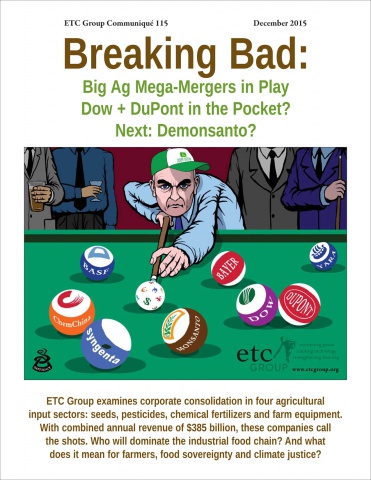 December 2015. In this new report, ETC Group examines corporate consolidation in four agricultural input sectors: seeds, pesticides, chemical fertilizers and farm equipment. With combined annual revenue of $385 billion, these companies call the shots. Who will dominate the industrial food chain? And what does it mean for farmers, food sovereignty and climate justice?

The Big Six agrochemical corporations (BASF, Bayer, Dow, DuPont, Monsanto, Syngenta) that dominate commercial seed and pesticide markets worldwide now insist they must get bigger, faster if the world wants food security in the midst of climate chaos. According to agribusiness, the extreme pressures of population, demand for meat, and climate crisis require Big Science and Big Money – and that means extreme Mergers all along the industrial food chain.

The fate of the six dominant pesticide and seed companies (and their $93 billion market) is in play. For all the talk of “Climate-Smart Agriculture,” their R&D strategies are collapsing and, among them, there are more sellers than buyers. Simultaneously, the much bigger ($175 billion market) greenhouse gas-intensive fertilizer industry is caught in the headlights of climate change negotiators and is wrapping itself in the mantle of Climate-Smart Agriculture to protect its assets. The four companies that control 56% of the $116 billion farm machinery industry already have the robotics hardware; are acquiring the software (Big Data, satellite surveillance) technologies; and are thinking about adding the bio-based software (seeds and pesticides) to their shopping cart. It’s too soon to tell which companies or sector will become the one-stop shop for farm inputs – but farm machinery, seeds, fertilizers and chemicals are now linked like never before. Monsanto collaborates with the world’s three biggest farm equipment companies (Deere & Co, CNH Industrial, AGCO). Deere has strategic alliances with five of the Big Six companies. Ultimately, the company that controls the data on soil, historical weather and crop yield, as well as the Big Box robot that deposits the seeds, pesticides and fertilizers will be the company that can gain most from crop insurance contracts that increasingly dictate inputs to the farmer. In the short term, the big shifts will likely be among the existing seed and pesticide enterprises, but even in the mid-term, watch out for the muck and machinery majors to rule the roost.

Ag mega-mergers threaten to undermine the basis of our food supply and jeopardize efforts to build climate resilience. Allowing more farm inputs to fall into fewer hands is a recipe for disaster. Nationally and internationally, governments must strengthen their anticombines/ cartel regulations to break up agricultural input sectors so that pesticide companies can’t also be seed companies and farm machinery companies can’t control chemicals, seeds, crop insurance, etc. Secondly, governments need to take a hard look at corporate “innovation,” recognizing that today’s intellectual property system smothers useful innovation and retards progress. To move us all toward food sovereignty, the world needs a new configuration of true innovators, including smallholder producers and public researchers – who are not undermined by spineless regulators.

The international battleground is wherever the Big Six – and their Bigger Brothers in farm equipment and fertilizers – push for even greater market power under the guise of “Climate-Smart Agriculture” while evading antitrust constraints and regulatory scrutiny for new, high-risk technologies (e.g., synthetic biology). Beyond the urgent need to suspend (better yet, end) exclusive intellectual property monopolies, the most important battleground is in the global South, the prime growth region for industrial agribusiness. There is no benefit for farmers or consumers if Argentina, Brazil, South Africa, China or Indonesia, for example, accept foreign corporate control over the first links in their food security chain. If two or three of these countries “just say no,” the mergers won’t happen and everybody’s game plan changes.