The Coalition Against Biopiracy* exposes Hooks and celebrates Cogs 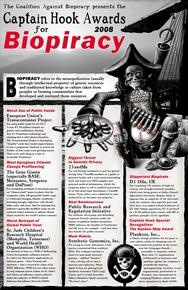 Today (21. May 2008) the world learned which corporations, governments, institutions and individuals earned a spot in biopiracy’s hall of shame when the Coalition Against Biopiracy (CAB) announced the winners of the 5th Captain Hook Awards at a lunch-time ceremony during the Ninth Conference of the Parties (COP9) to the Convention on Biological Diversity (CBD) in Bonn, Germany.

“The Maritim Hotel, where the CBD meets this week and next, was the perfect place to dock our ship and divvy up booty between black-hearted biopirates and hard-working cogs – those tireless biopiracy resistors working to foil plots to monopolize genetic resources and indigenous knowledge,” said Golda Hilario of SEARICE, who doubled as Tinkerbell at today’s award ceremony. SEARICE, based in the Philippines, is a member of the Coalition Against Biopiracy. [N.B. In the Middle Ages, cogs were small ships built with high sides to make them less vulnerable to pirate attacks.]

“Climate-change profiteers commanded the stage for the first time at the biopiracy awards,” noted Jim Thomas of Ottawa-based ETC Group, another CAB member. Thomas donned eye-patch and cape to transform himself into Captain Hook, Tinkerbell’s less endearing counterpart. “Climate chaos offers biopirates unprecedented opportunities for pillaging the commons,” explained Thomas. “On the one hand, we have Gene Giants like Monsanto and BASF monopolizing so-called ‘climate-ready’ genes in crops; on the other hand, we have geo-engineering companies like Planktos, Inc. and ONC trying to break into the carbon market with reckless – and scientifically dubious – schemes to sequester carbon in algae; and, on the…hook, we have companies pilfering high oil-content plant varieties to grow more of their destructive agrofuel crops.”