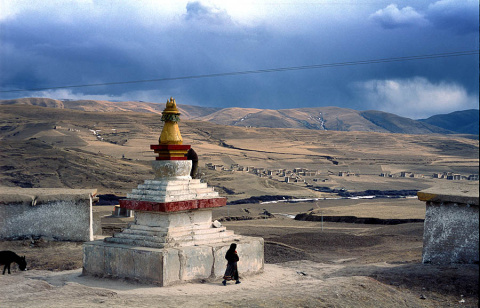 A massive weather modification network – the largest ever — is being planned for the Tibetan Plateau. The plan, according to recent reports, is to cover an area of the size of Spain with thousands of fuel burning chambers (roughly akin to upside-down rockets) to blast silver iodide into the atmosphere, stimulating cloud formation and precipitation.

The immediate aim of the project, as proposed by the Aerospace Science and Technology Corporation (a major military contractor), would be to channel additional rainfall into China’s northern regions to the tune of 5-10 billion cubic meters per year. This could have devastating effects on the livelihoods of the pastoralists and peasants living at the Tibetan Plateau. But the effects could be even more far-reaching: the project will have unknown effects on global climate patterns, and could potentially create a de facto infrastructure for geoengineering.

The South China Morning Post recently reported that 500 such chambers have already been built. But a massive proposed expansion, known as Tianhe or “Sky River,” would involve the addition of tens of thousands of these burning chambers over the vast plateau. Additionally, a satellite monitoring network planned for 2020 would provide data to fine-tune the effects and track monsoon weather patterns as they form over the Indian Ocean. Construction on the Songta dam in Tibet. Photo: International Rivers

This isn’t the first time China has used weather modification technology, having famously used artillery and rocket launchers to ensure clear weather for the opening ceremonies of the Olympic Games in 2008 and celebrations in 2009. The technique of cloud seeding was first developed in the US in the late 1940s. Within a few decades, the US military was using it to attack Vietnam and Cuba by disrupting weather patterns. More recently, Russia, India, several US states and other countries are attempting to use cloud seeding to address droughts and water shortages.

Though widely used for cloud seeding, silver iodide is considered toxic to aquatic life, and the downstream ecological effects of its large-scale use are not well understood. A chemical engineer told Asia Times that “once silver iodide enters the groundwater, as rain, it is not expected to be in a very toxic form, but it may disrupt the aquatic ecosystem.” A 1970 scientific paper suggests that silver iodide could affect the life cycles of aquatic microorganisms, disrupting nutrient cycles.

Similarly, the downwind and downstream effects of changing weather patterns on a continental scale are poorly understood. The China’s river diversions and vast network of more than 22,000 dams have had profoundly debilitating effects on rivers, which in some cases have stopped flowing altogether.

In contrast to these unknowns, the proposed expansion of the weather modification led by the China Aerospace Science and Technology Corporation is the subject forcefully optimistic discourse. Sky River, according to the company’s CEO, “will make an important contribution not only to China’s development and world prosperity, but also the well being of the entire human race.” China has initiated a process of depopulating wilderness areas under a program of “environmental protection” and the creation of a series of nature preserves. The government presents the relocation of villages as part of a program to battle poaching and forest fires.

However, these policies have been contested by many of those Tibetans who live on the land. A report by the International Campaign for Tibet suggests that China’s policy does not take into account the indigenous inhabitants’ needs and livelihoods nor the important role in caring for the land and biodiversity. Concerns about violations of international law, inadequate compensation, and a lack of free, prior and informed consent have also been raised.

Other reports cast doubt on the government’s claims, suggesting that “environmentally protected” areas are actually subject to increased extraction, citing evidence of increased production of bottled water and the construction of many new dams. Information about the locations of the massive proposed expansion of burning chambers is scarce, and part of the reason is that access to the Tibetan plateau itself is increasingly limited.

A paper in the Bulletin of the Chinese Academy of Sciences describes the plateau as “an important shelter to safeguard China’s environment and ecological system” having “a strong bearing on the atmospheric circulation and climate pattern over the plateau and its surrounding regions… it plays an important role in water source supply and conservation.”

One aspect of the the Sky River project that has not been mentioned in any of the reports so far is the possibility that – intentionally or otherwise – the project could create infrastructure for global geoengineering.

Scientific American has documented a “strange pumping effect” whereby monsoon winds sweep pollution from India and China to incredible altitudes – as high as 18 kilometers. From there, the pollutants are spread globally through strong horizontal winds in the stratosphere.

A network of burning chambers coordinated by satellites could, theoretically, be used to pump other kinds of particles into the stratosphere, spreading them globally. One potential use of such an infrastructure would be to add substances to the stratosphere that would increase the amount of sunlight reflected back into space, thus creating a potential platform for Solar Radiation Management experiments.

While geoengineering is not in the project’s official mandate as such, the Sky River project as proposed would have significant transboundary implications on weather patterns and the vast scale of the project is unprecedented. Weather modification has never been conducted at this scale before. There is great uncertainty about its likely impacts, both regionally and on the global climate. If the government decided to experiment with explicitly global forms of geoengineering in the future, it’s possible that much of the work will have already been done to set it up.

If it works as advertised, China’s Sky River project could give the country significant control over the water supply that about half of the world’s population depends on. The Tibetan plateau feeds not only the Yellow and Yangtze rivers that flow through China, but also the Mekong, Salween and Brahmaputra rivers, which are important for Myanmar, Thailand, Laos, Cambodia, Vietnam and India.

While it’s unclear how China’s project would affect those rivers, it would be difficult not to perceive even potential control as a geopolitical threat. The Brahmaputra River, as one Indian researcher has noted in the Asia Times, regularly floods, causing major damages and loss of life. Could China use future weather modification infrastructure to mitigate flooding… or intensify it? The geopolitical applications of vast networks like the proposed Sky River are scarcely mentioned, but real nonetheless.

Geopolitical concerns only increase with the possibility that this project could be used to modify global temperatures in the future. A sophisticated network like Sky River raises the possibility – though far from certainty – of modifying weather patterns in different parts of the world, potentially unbeknownst to those whose weather is being modified.

Observers – including the author of the aforementioned Asia Times article – have noted the use of weather modification technologies by the United States, particularly Operation Popeye, the country’s attempt to create unfavourable weather conditions for the North Vietnamese during the Vietnam War.

What is less often mentioned is the international treaty that was signed as a result: the Environmental Modification Convention, which came into force in 1978. It has since been ratified by China, the United States, Russia, Brazil and the United Kingdom as well as 73 other signatories. ENMOD, as it is known, bans all use of techniques for modifying the environment – for “military or hostile” purposes.

While ENMOD has fallen dormant, it represents an established framework for addressing concerns about vast weather modification networks like the Sky River proposal. At the very least, it could be used to push for more transparency about China’s use of weather modification technology and put explicit limits on geoengineering applications.

China is also a signatory of the Convention on Biological Diversity where a de facto moratorium on geoengineering was established in 2010. While the stated intentions of Sky River do not include geoengineering as defined in the CBD moratorium, the project’s scale and potential for geoengineering should be reviewed by the CBD as a potential violation of the moratorium.

The World Meteorological Organization (WMO) has also expressed concern about both geoengineering and weather modification, stressing that it is difficult to contain weather modification to a limited area. “The atmosphere has no walls,” a member of the WMO’s expert team was quoted as saying. “ What you add may not have the desired effect in your vicinity, but by being transported along might have undesired effects elsewhere.”

Thanks to Gabriel Lafitte of rukor.org, who contributed research to this report.