Corporate vision of the future of food promoted at the UN 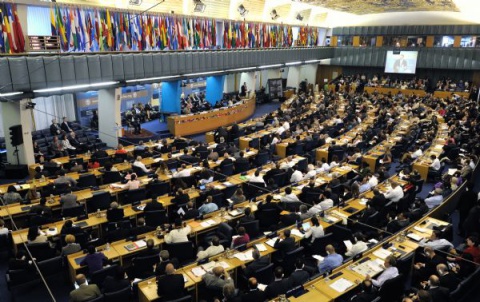 (Rome, Monday 15 February 2016) Just when the biotech companies that make transgenic seeds are merging, the corporate vision of biotechnology is showing up at FAO. At today’s opening of the three-day International symposium on agricultural biotechnologies convened by the Food and Agriculture Organization of the United Nations (FAO) in Rome, more than 100 civil society and social movement and organizations (CSOs) from four continents have issued a statement denouncing both the substance and structure of the meeting, which appears to be another attempt by multinational agribusiness to redirect the policies of the UN agency toward support for Genetically-engineered crops and livestock.

The global peasant and family farm movement, La Via Campesina, invited CSOs to sign the letter when the symposium’s agenda became public.  Two of the FAO keynote speakers are known proponents of GMOs, and the agenda and side events over the three days include speakers from the Biotechnology Industry Organization (a biotech trade group in the USA), Crop Life International(the global agrochemical trade association), DuPont (one of the world’s largest biotech seed companies) and CEVA (a major veterinary medicine corporation), among others. FAO has only invited one speaker or panellist openly critical of GMOs.  Worse, one of the two speakers at the opening session is a former assistant director general of FAO who has pushed for so-called Terminator seeds (GMO seeds programmed to die at harvest time forcing farmers to purchase new seeds every growing season), in opposition to FAO’s own public statements. The second keynoter’s speech is titled, "Toward Ending the Misplaced Global Debate on Biotechnology" – suggesting that the FAO symposium should be the moment for shutting down biotech criticism.

In convening the biased symposium, FAO is bowing to industry pressure that intensified following international meetings on agroecology hosted by FAO in 2014 and 2015.  The agroecology meetings were a model of openness to all viewpoints, from peasants to industry. But the biotech industry apparently prefers now to have a meeting they can control.  This is not the first time FAO has been drawn into this game. In 2010, FAO convened a biotechnology conference in Guadalajara, Mexico, that blocked farmers from its organizing committee, and then tried to prevent their attendance at the conference itself.

"We are alarmed that FAO is once again fronting for the same corporations, just when these companies are talking about further mergers amongst themselves, which would concentrate the commercial seeds sector in even fewer hands" the CSO statement denounces.

It is clear, according to the Civil Society Statement, that industry wants to use FAO to re-launch their false message that genetically engineered crops can feed the world and cool the planet, while the reality is that nothing has changed on the biotech front. GMOs don't feed people, they are mostly planted in a handful of countries on industrial plantations for agrofuels and animal feed, they increase pesticide use, and they throw farmers off the land. Transnational biotech companies are trying to patent the planet's biodiversity, which shows that their main interest is to make enormous profits, and not to guarantee food security or food sovereignty. The industrial food system that these companies promote is also one of the main drivers of climate change. Confronted with the rejection of GMOs by many consumers and producers, the industry is now inventing new and possibly dangerous breeding techniques to genetically modify plants, without calling them GMOs. In doing so, they are trying to avoid current GMO regulations and trick consumers and farmers.

The agroecology activities were much closer to the way that FAO should act, the Statement points out, "as a centre for knowledge exchange, without a hidden agenda on behalf of a few." Why does FAO now limit itself again to corporate biotechnology and deny the existence of peasant technologies? FAO should support the peasant technologies, that offer the most innovative, open source, and the effective pathway to ending hunger and malnutrition. It is time to stop pushing a narrow corporate agenda, says Civil Society. "The vast majority of the world's farmers are peasants, and it is peasants who feed the world. We need peasant-based technologies, not corporate biotechnologies."

"It is high time that FAO puts an end to biopiracy and to its support for genetically modified crops, which only serve to allow a handful of transnational companies to patent and to grab all the existing biodiversity," said La Via Campesina leader Guy Kastler. "On the contrary, FAO should support farmers' organisations and researchers engaged in collaborative plant breeding in the service of food sovereignty and peasant agroecology”.

The statement and the list of signatories can be downloaded here.

Guy Kastler and other Via Campesina leaders