Enclosures of the Mind: Intellectual Monopolies 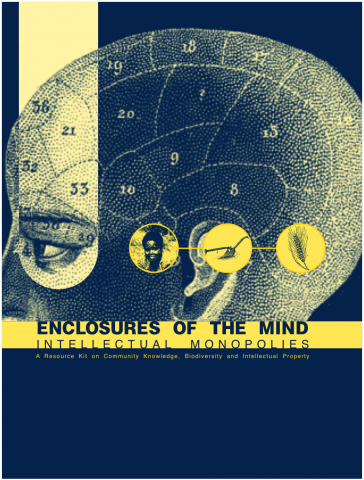 This kit is designed as an information and advocacy tool in response to two new, legally-binding international agreements.

• The Convention on Biological Diversity, adopted at the Rio Earth Summit in 1992, came into force in December 1993. The Biodiversity Convention affirms the sovereignty of nations over their biological resources, but also accepts the concept of “intellectual property” over living materials.

• In June 1994, at Marakesh, the Uruguay Round of the General Agreement on Tariffs and Trade (GATT) was signed, and on January 1st, 1995 the World Trade Organization (WTO) came into being to administer and monitor both the Uruguay document and the ongoing process of global trade harmonization. For the first time, a global trade accord contained explicit obligations for signatory states to adopt legislation for intellectual property, including monopolies over life forms.

Although both these agreements have the force of international law, there remains considerable flexibility in how governments might inter- pret and implement their intellectual property provisions. Further, the time frame for implementation permitted under the agreements is either undefined, or allows legislators considerable leeway well into the first decade of the next century.