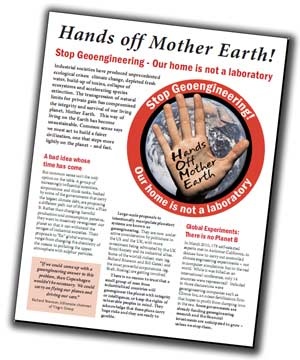 Amidst revelations in this weekend’s London Times newspaper{1} that a team of scientists and engineers funded by billionaire Bill Gates are planning to carry out a 10,000 square kilometer field trial of controversial “cloud-whitening” technology, over one hundred civil society groups are urging governments meeting on biological diversity in Nairobi to stop risky geoengineering experiments now. Geoengineering refers to large-scale technological schemes to intentionally alter the planet’s systems as a quick fix for climate change.

The San Francisco based “Silver Lining Project” directed by entrepreneur Kelly Wanser has so far received $300,000 from Bill Gates to develop technologies that will increase the whiteness of marine clouds. Theoretically, executed on a massive scale, whiter clouds could increase the earth’s albedo, reflecting more sunlight back to space and thereby reduce global warming (without changing the composition of greenhouse gases which cause warming). The Silver Lining Project has decided to press ahead with plans to alter cloud-cover over an undisclosed 10,000 square kilometre patch of ocean (as large as the BP oil slick was a few days ago). If not stopped, the Gates ‘cloud-bleaching’ experiment would be the largest known geoengineering field trial to date. Its effects could include changes in rainfall and other altered weather patterns. Among the sites frequently spoken of by scientists engaged in this research are the Pacific coasts of North and South America (specifically California, Ecuador, Peru and Chile).

Most worrisome, the Times revealed: “The British and American scientists involved do not intend to wait for international rules on technology that deliberately alters the climate.” Such rules could be set in motion this week as scientists and diplomats from 193 nations meet under the auspices of the UN Convention on Biological Diversity’s scientific body. The meeting in Nairobi of SBSTTA 14 (Subsidiary Body of Scientific, Technical and Technological Advice, running from May 10-21 2010) is the first time a UN Body has addressed geoengineering as a whole since the signing of the ENMOD Treaty in Geneva in 1976 that banned environmental modification for “hostile uses”.[2]