A Briefing for Delegates March/April 2014 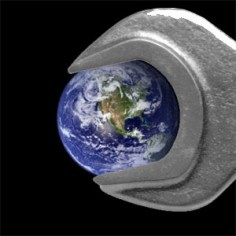 The contribution to AR5 of Working Group I (WGI), approved in Stockholm, September 2013, referred to geoengineering techniques, including so-called solar radiation management (SRM) and carbon dioxide removal (CDR), but stopped short of endorsing them. While acknowledging the related uncertainties, limitations, likely negative side-effects and long-term global consequences, WGI speculated that “a large net removal of CO2 from the atmosphere over a sustained period” (i.e., CDR) could make reversing a large fraction of anthropogenic climate change possible and that SRM methods – “if realizable” – could offset a global temperature rise.

The inclusion of SRM in WGI’s Summary for Policymakers, under last-minute pressure from Russia, suggested to the established science press “that the controversial area is now firmly on the scientific agenda.” Further, geoengineering advocates interpreted the inclusion of CDR and SRM as “a reflection of growing governmental interest.” As a Guardian essay noted: “To include mention of geoengineering, and its supporting ‘evidence’ in a statement of scientific consensus, no matter how layered with caveats, is extraordinary.” According to latest reports, WGII (Adaptation) and WGIII (Mitigation) may also address geoengineering in their AR5 contributions to be released in March and April, respectively.

Throughout the AR5 process, civil society groups have alerted the IPCC to the risks of being distracted by a pro-geoengineering agenda. In 2011, 160 groups sent an open letter to the IPCC on the cusp of a joint-Working Group “Expert Meeting on Geoengineering” held in Lima, Peru. The Open Letter noted the meeting’s misplaced discussion of governance, stating that “the critical question of governance is one that needs to be fully debated by the international community, with all interested states, civil society organizations, indigenous peoples and farmers’ organizations taking part in a clearly democratic, multilateral transparent and accountable way. Scientists from the IPCC should participate in that debate, but they do not have the expertise or legitimacy to determine the suitability of existing governance mechanisms.”

The release of the AR5 contributions of WGs II and III is an opportune moment to urge the IPCC to protect its credibility as a policy-neutral body and to remind the Panel, as the source of scientific information to the UN Framework Convention on Climate Change, of the Framework’s objective: “The ultimate objective… is to achieve… stabilization of greenhouse gas concentrations in the atmosphere at a level that would prevent dangerous anthropogenic interference with the climate system.” (Article 2, emphasis added) By scientific accounts (see below), geoengineering will amount to “dangerous anthropogenic interference with the climate system.” The IPCC should take care not to imply an acceptance of geoengineering techniques or to subvert – even inadvertently – the Objective of the Climate Convention.

At the COP10 of the Convention on Biological Diversity (CBD, 2010), a landmark Decision [X/33 8 (w)] established a de facto moratorium on geoengineering activities that may affect biodiversity. The CBD COP11 wisely reaffirmed the moratorium (Decision XI/20). Nevertheless, some private actors continue to see geoengineering as a quick, cheap and potentially unilateral ‘techno-fix,’ and high-carbon governments see a strategy for sidestepping their historic mitigation and adaptation obligations to the international community. As a result, some governments are increasingly sanguine toward geoengineering and seemingly open to experiments in open air. Meanwhile, evidence continues to mount that geoengineering is too risky to contemplate.

Recently published, peer-reviewed research supports the overwhelming scientific opinion that geoengineering techniques will have negative impacts, especially on the tropics and subtropics, which could be catastrophic: