The Big Downturn presented in WSF 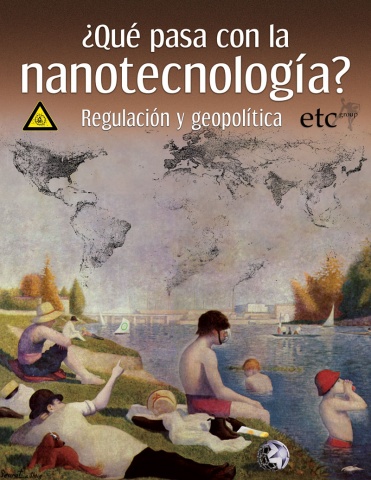 Meanwhile, an estimated 50,000 people have come together to learn, debate and strategize at the WSF in Dakar, Senegal. ETC Group brings a new report – The Big Downturn? Nanogeopolitics – to that very large discussion. Executive director Pat Mooney explains why:  “An urgent topic in Dakar is the proper governance of emerging technologies and how society can best respond to threats – social, environmental, health – that new technologies may pose. Nanotechnology is a case in point, having been rolled out with virtually no government oversight or public debate.”

Mooney adds, “Our first major report on nano-scale technologies, The Big Down, made its debut at the World Social Forum in Porto Alegre eight years ago. We’ve brought The Big Downturn? to Dakar because nano commercialization and investment are increasing while the regulatory vacuum persists; nano’s risks and impact need fuller discussion.”

ETC Group’s 68-page report, available for download from www.etcgroup.org/en/node/5245, provides a current snapshot of global investment, markets, governance and control, including patenting. Though the impact of tiny tech is especially difficult to discern given the lack of an agreed-upon definition for “nano” and the absence of labeling requirements, ETC Group’s report finds:

·      Worldwide, there are more than 2000 nanotech enterprises researching and/or manufacturing nanoparticles.

·      Even while the majority of consumers remain in the dark about the existence of nano-scale ingredients in commercial products, the number of product lines far exceeds the 1500 or so that have been identified by publicly available market surveys.

·      At least 60 countries have state nanotech initiatives, including newcomers Nepal, Sri Lanka and Pakistan. The United States’ public and private sectors together spend the most money; China fields more scientists. Meanwhile, Russia has suddenly emerged as the biggest public spender.

·      While analysts tout a whopping $224 billion nano-market, the actual market figure is drastically lower – perhaps by more than ten times.

The report concludes that even though the nano-industry is nervous about its health and environmental exposure and some governments are having second thoughts about their decision to fast-track nanotech, no one is willing to retreat from a technology they’ve claimed will help end the global recession and usher in a “green economy” – and rake in trillions of dollars in revenue.