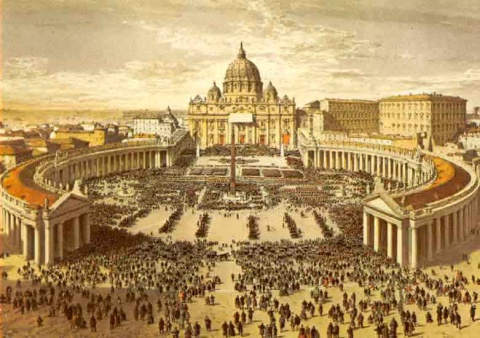 At the request of major peasant organizations, and with the permission of Pope Francis, a group of scientists and agricultural experts have now made public a letter and document on the problem of genetically modified seeds that was sent to the Vatican April 30.  Signed by eight experts from Argentina, Brazil, Mexico, India and Canada, the letter and accompanying document (attached) call upon His Holiness to speak out against the negative impacts of GM seeds on the world’s peasants and global food security.

The document questions the scientific basis of GM technology, its failure to increase yields, the exponential increase in pesticide use, the dangers of transgenic  contamination of peasant crops, the threat to human health and the concern that GM seeds are patented and monopolized by a handful of transnational corporations.

The scientists particularly identify GM maize contamination in its Centre of Origin and Diversity in Meso-America and the imminent threat of GM Rice in Asia – that crop’s Centre of Origin and Diversity.  The scientists are also concerned that bills currently in the Brazilian Congress could legalize the commercial use of Terminator seeds (GM seeds that die at harvest) potentially overturning the long-standing UN moratorium against the suicide seed technology.

MST, The Landless Rural Workers Movement in Brazil, a founding member of Via Campesina – the world’s peasant organization representing 200 million smallholder producers – asked the scientists to prepare their report late in 2013 following a meeting with Pope Francis held at the Vatican.  The Rome meeting brought together marginalized and unemployed people’s to discuss livelihoods. The threat of GM seeds came up as peasant leaders from Brazil’s MST described the land threats, high costs and food insecurity created by the widespread imposition of GM crops in their country.  Following this, the Vatican asked the peasant movement for a short list of scientists knowledgeable about the negative impacts of GM crops.

Preparation of the text was complicated by the sudden illness and eventual death of Prof. Andrés Carrasco of Argentina who played an important role in the process. Prof. Carrasco was the author of a breakthrough scientific report related to the negative health impacts of Monsanto’s glyphosate herbicide in Argentina.  Pope Francis has agreed that the letter and study be made public.

The UN Food and Agriculture Organization (FAO) has identified specific Centres of Origin and Diversity around the world where the greatest genetic variability of major crops can be found. The genetic diversity in these Centres is considered by the scientific community to be vital for long-term food security and for farmers to respond to Climate Change. GM contamination in these Centers could wipe out this diversity.

Terminator seeds have been condemned by FAO and are the subject of a 2000 moratorium by the UN Convention on Biological Diversity. Under public and UN pressure, major seed companies have agreed to honor the moratorium. Because the GM seeds die at harvest time, farmers would be obliged to buy new seed each growing season at enormous cost and with a devastating loss in diversity.

The letter to Pope Francis and the document, entitled “Why Genetically Modified Crops Pose a Threat to Peasants, Food Sovereignty, Health, and Biodiversity on the Planet” can be found here.