PRESS RELEASE -- Banners to Bezos and Gates: Back Off of Biodiversity! 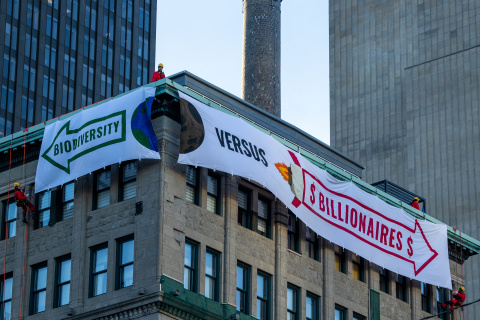 The banners were unfurled to warn delegates that mega-billionaires such as Jeff Bezos (founder of Amazon.com) and Bill Gates (founder of Microsoft) are perversely influencing global decisions about biotechnology and conservation including restructuring global biodiversity financing in unaccountable ways. At last week’s CBD COP15 opening ceremony, UN Secretary General Antonio Guterres had already told  delegates to “forget the deluded dreams of billionaires – there is no planet B.”

This action comes as the ‘Bezos Earth Fund’ is expected to announce further billions of dollars in funds toward securing the controversial “30x30” policy that has been branded ‘the biggest land grab in history.’ Although best known for his Amazon.com web business, Bezos also boasts a ‘Blue Origin’ space business to build the ‘road to space.’ His stated aim is to move most human beings off the planet into future space colonies. With typical hubris, Mr Bezos recently told an audience in New York, “I’ve always wanted to turn the earth into a sort of national park.”

“We are alarmed to see biodiversity megabucks being bestowed by yet another big tech billionaire, known for his ruthless disregard of human rights and ecology,” explains Jim Thomas of ETC Group, an international watchdog that tracks behavior of tech giants. “If Bezos gave a damn about a future in  harmony with nature, he would begin by properly paying taxes, properly paying his workers and also making reparations for the enormous harm to nature already caused by the resource extraction for his commercial activities.”

But Bezos is not the first: In the last six years, civil society groups active at the CBD have denounced the impact of funding by tech billionaires such as Bill Gates and Dustin Moscovitz (Facebook founder) on genetic technologies such as gene drives and geoengineering. Gates-sponsored lobbyists, science groups and public relations firms like the Alliance for Science, Emerging Ag Inc. and the African Network of Biosafety Experts have attempted to influence official UN expert groups, influence negotiation text, and coordinate with the African Union to advocate for gene drive experiments in Africa. Gates has also invested millions to promote geoengineering (i.e. climate-altering) technologies to attempt to undo a hard-won moratorium at the CBD. Gates invested heavily in Target Malaria Project, which is developing gene drive mosquitoes for release in Africa.

“Africans refuse to be the guinea pigs of gene drives! The solution to malaria lies in biodiversity, hygiene and sanitation,” says Ali Tapsoba, président of Terre à Vie an NGO based in Burkina Faso, attending COP15.

‘’Billionaires and the corporate lobby should not influence the decision making when there is an urgent need to save us from the biodiversity crisis,‘’ adds Thibault Rehn, from Quebec-based Vigilance OGM. “Early this week, we denounced Croplife, the major biotech lobby that heavily promoted the use of GMO and pesticides, despite their destructive impacts on biodiversity.’’

“These massive infusions of billionaire philanthropic cash into the UN CBD are perpetuating the financialisation and corporate takeover of nature through approaches such as ‘blended finance,’ private financing, and the imminent establishment of markets in ecosystem services,” says Helena Paul of EcoNexus and the Global Forest Coalition.

"Billionaire funds exist as a result of corporate exploitation of workers and the environment. Their donations are yet another way in which they skew the outcomes of the biodiversity conference away from real regulation, replacing them with greenwashing measures," says Hemantha Withanage, Chair of Friends of the Earth International.