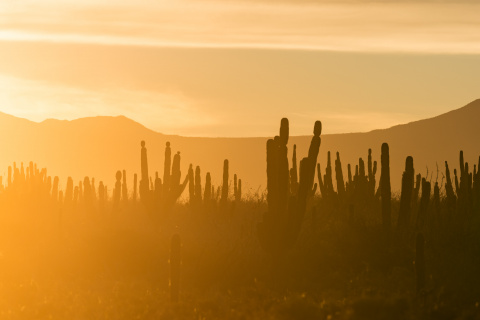 Mexico City, Mexico – A longtime watchdog on geoengineering activities, ETC Group is sounding the alarm on two recent solar geoengineering tests that have released sulfur dioxide over Baja California Sur, Mexico as part of an experiment to block the sun’s warmth from reaching the earth.  A two-man start-up from the United States, calling itself Make Sunsets, is behind these tests and appears to be seeking to profit from the climate crisis.

Inspired by science fiction and academic solar geoengineering research, such as the Harvard SCoPEx project, Make Sunsets - did not hold or apply for any permits from Mexican authorities to conduct a new business activity, let alone solar geoengineering experiments. In fact, the tests took place before the company was incorporated. Nonetheless, the company is already announcing further experiments in the same region.

“These experiments are a textbook case of climate colonialism and greenwashing,” said Silvia Ribeiro, Latin America director from ETC Group.  “Entrepreneurs from one of the highest emitting countries in the world are using a country in the Global South and Indigenous peoples’ lands as a testing ground for their private business while selling “cooling credits” to companies that want to avoid reducing their emissions”.

These tests follow a pattern common in geoengineering research: conducting the majority of experiments on Indigenous lands and without obtaining Free, Prior, and Informed Consent, the right to which is established in the UN Declaration on the Rights of Indigenous Peoples.


Make Sunset's business model is to sell "cooling-credits", an imitation of "carbon-credits", in exchange for solar geoengineering experiments that would supposedly block some of the sun’s heat and light from reaching the earth.

Make Sunset’s tests appear to be more of an irresponsible publicity stunt than a technical  experiment since the tests, using weather balloons, were conducted without even the minimum of tracking equipment that could provide information about the results. Nonetheless, the founders of Make Sunsets have raised $750,000 USD and are aiming to move towards deployment, benefitting from research done by scientists who claimed their work was conducted for the purposes of research alone.

Speaking about SCoPEx, the Harvard solar geoengineering experiments that motivated the Make Sunsets tests, Niclas Hällström, director of the Swedish think-tank WhatNext? pointed out that “there is no merit in this kind of test except to enable the next step. You can’t test the trigger of a bomb and say ‘this can’t possibly do any harm’”. These latest tests make it clear that academic geoengineering research experiments cannot be considered in isolation from private for-profit initiatives like this one. Once the research is on the table, all that is required is sufficient funds for all kinds of initiatives to be undertaken.

All this could be just another story about a couple of profit hungry U.S. citizens in Mexico, if solar geoengineering wasn’t such a high risk technology that can’t be ignored. Hundreds of environmentalists, women, farmers and Indigenous groups, climate activists and civil society organizations all over the world have already called for this technology to be banned.

Because of the great risk it poses to communities and biodiversity, the UN Convention on Biological Diversity called for a moratoria against the deployment of geoengineering in 2010, a call that is still in place.

Later that year, over 370 scientists from all over the world, called for the establishment of an international Solar Geoengineering Non-Use Agreement because they concluded that solar geoengineering is too risky, can´t be governed in a fair and democratic way and could be misused by powerful actors or countries controlling the technology.

“This negligent US geoengineering start-up is not scientifically significant, nor are they operating on a scale that could actually block sunlight from reaching the earth. For all we know, it could be a scam if investors believe that these tests would actually cool the earth’s temperature. Nonetheless, they must be stopped, as Make Sunsets could legitimize a wild west of solar geoengineering experiments, motivate billionaires to invest in this crazy initiatives, and worse, open the door to large-scale ‘official’ geoengineering programs that are eager to appear as ‘more responsible’”, said Neth Daño from ETC Group in the Philippines.

Like nuclear weapons and other extreme technologies, solar geoengineering is too dangerous and too difficult to govern and shouldn´t be developed. What is happening now is exactly the kind of the risk that ETC Group and the Hands Off Mother Earth Alliance have pointed out time and again.

As the Make Sunsets tests demonstrate, once the research is available, actors with the resources will use this dangerous technology. Research is not neutral and even small experiments can have huge long term consequences if a billionaire, or another powerful actor, decides to implement the technology on a large scale. Solar geoengineering must be stopped in its tracks.


Editor's Note:
Solar geoengineering comprises a set of large-scale technological proposals to reflect back part of the sun rays, in an attempt to reduce the increase in the earth’s temperature caused by global warming and climate change. It does not address the root causes of climate change and CO2 emissions would continue, creating new climate risks.

Deployed at scale, solar geoengineering could have dangerous environmental, climatic, social and geopolitical risks. Among other impacts, it could cause catastrophic changes to weather patterns like the monsoon, and negatively impact the sources of food and water for millions of people in the tropics. Furthermore if a large-scale experiment was initiated and then interrupted, scientists predict that the earth’s temperature could skyrocket suddenly, a process known as “termination shock”.

With offices in Mexico, Philippines, Canada and the UK, ETC Group works to address the socioeconomic and ecological issues surrounding new technologies that could have an impact on the world’s poor and vulnerable people.

ETC Group works with other civil society organizations and movements to protect earth’s systems and to support communities to resist solar geoengineering experiments, whether they are being conducted by government sanctioned institutions or start-ups like Make Sunsets.