Time to Wave the White Flag for a Failed Techno-Fix? 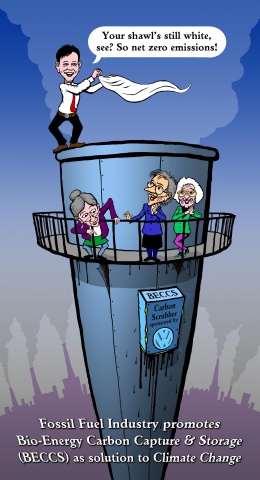 Try though they might, Volkswagen can’t seem to get off the air those three little old ladies in their television commercials waving a white scarf in front of a Volkswagen diesel exhaust pipe. (See cartoon.) Volkswagen’s emission scandal is just a prelude to a much bigger emissions sleight of hand that will be rolled out in Paris this December at the Climate Change Summit.

Shell and Exxon – among others – are telling leaders that the world can have its cake and eat it too. They claim that the energy industry can continue to pump fossil fuels into the atmosphere because they are developing a carbon capture strategy that will ultimately let them extract CO2 from the air and bury it at the bottom of the ocean or deep in the earth. What the leaders in Paris won’t be told is that the promise of the technology is a myth.

Over the past 14 years governments have announced more than $24 billion in support for what is euphemistically called Bioenergy with Carbon Capture and Storage (BECCS) and private companies have spent $9.5 billion since 2005 in pursuit of the same suite of techno-fixes. The IEA (International Energy Agency), in 2009, warned that major emitters would need to build 3400 carbon capture and storage sites by 2050. The estimated cost would be $4 trillion. In the last five years, 33 experimental sites or plants have been scrapped or mothballed. To date only one plant is operating, although a few others are in various stages of planning or construction. According to the Financial Times in September, “few technologies have had so much money thrown at them for so many years by so many governments and companies, with such feeble results.”[i]

Although most of the money and experimentation is focused on carbon capture and storage, the poster child for the mythical (and long-awaited) BE (Bio Energy) in BECCS was to be showcased at the vast Drax power plant in North Yorkshire in the UK. The existing plant at Drax was to be supplemented by a second BECCS-enabled plant called the White Rose Carbon Capture Plant however Drax announced last week that they are now ceasing investment in the high profile BECCS project. White Rose was to have mostly burnt coal with 15% of its fuel coming from wood pellets brought from as far away as the USA, Canada and, potentially, Brazil. This would be wood that has already stored CO2 as trees and is then burned to create electricity while capturing the escaping CO2 and pumping it “safely” to the bottom of the North Sea. According to some, burning wood pulp in this way could theoretically help re-jig old coal plants to achieve so-called negative emissions. However, as Biofuelwatch the well-regarded watchdog group notes, the implications for temperate and tropical forests – and neighboring farmlands as well as the carbon emissions from soils in clearing biomass– is an unanswered question. Now however it seems unlikely that White Rose will ever produce electricity.

Nonetheless, the Climate Change Summit in Paris this December will announce that a combination of entirely voluntary emission cutbacks by governments and BECCS – an entirely mythical emission reduction technology that even industry appears unwilling to bet its own money on – will halfway through this Century kick into action to get the world to “Net Zero emissions” by 2100 and keep us below a devastating 2°C temperature rise. In reality, the leading companies working on carbon capture and storage are scrapping their original business plan (sucking CO2 out of sight), and are selling their technology to the fossil majors for “enhanced oil recovery” – pumping CO2 down wells to push more fossil carbon up into the atmosphere. Industry has even set up its own brand new ‘net-zero’-friendly NGO to push for this sleight of hand – an outfit confusingly named ETC (Energy Transitions Commission) helmed by an advisory board stuffed with oil and chemical executives. Readers should rest assured that the existing ETC will not let itself be (carbon) neutralized by the new Corporate ETC (C-ETC) or its puppet-masters!

World leaders coming to Paris are betting that this non-existent technology may somehow work a generation from now and are hoping that future governments will honour their Paris pledges. When they fail, the next fallback position for the world’s most powerful countries will be to deploy geoengineering – solar radiation management strategies that blow sulfate’s into the stratosphere to block or reflect sunlight and artificially (and temporarily) lower temperatures. The UN and major scientific bodies have already condemned SRM but the decisions in Paris this year may leave politicians no other choice by 2030 or 2050.

The world’s most polluting industries can’t be trusted to devise safe techno-fixes for climate change tomorrow that are really intended to let them keep on pumping gas today. Volkswagen intentionally deceived regulators and customers about their emission levels for seven years. The companies that brought us the Exxon Valdez, Deepwater Horizon, and the oil scandals in Nigeria and Ecuador can’t be trusted to rescue us from climate change.