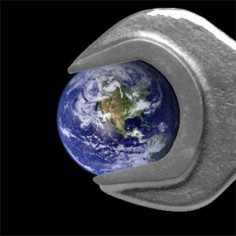 - for immediate release -
The latest instalment of the Intergovernmental Panel on Climate Change’s (IPCC) Assessment Report (AR5), released today, contains no reference to geoengineering in its Summary for Policymakers, though it attributes a slew of negative effects to so-called planet hacking in its full report. Released after a week-long negotiating session of Working Group II (WGII, which assesses the human and ecological vulnerabilities to climate change and options to adapt), today’s report represents a precarious victory over ongoing pressure within the IPCC – by geoengineering proponents and some governments (e.g., Russia, the USA, Canada and the UK) – to legitimize geoengineering as a solution to climate change.
The release of WGII’s report could also simply reflect the calm before the storm; geoengineering is expected to return in force when Working Group III (WGIII) meets in Berlin next month.
Unlike Working Group I (WGI), whose contribution to AR5 released last September included bullet points referring to so-called Solar Radiation Management and Carbon Dioxide Removal technologies, WGII did not mention geoengineering in its Summary for Policymakers. The Summary -- selected text from a much longer report -- is especially influential because it is negotiated line-by-line and agreed by governments.
"It is reassuring that Working Group Two has focused on its mandate and wasn’t distracted by the geoengineering techno-fix," ETC Group’s Neth Daño said from Yokohama.
“The report from Working Group [One] in September signaled to some that governments and the IPCC were offering polluting countries a way out of fulfilling their commitments to reduce emissions,” Daño added.
WGII did, however, in the body of its full report, highlight geoengineering’s likely negative impacts. Among them:
“Geoengineering has the potential to aggravate the suffering of those most impacted by climate change; those looking at adaptation strategies are right to be skeptical,” Daño added.
The geoengineering fight so far at the IPCC
In 2011, more than 160 civil society groups from around the world warned that the IPCC’s “Expert Meeting on Geoengineering” (held in Lima, Peru) put the Panel at risk of straying from its mandate and being distracted by the false promises being peddled by geoengineering advocates. (1)
Then in September 2013, the UK’s Guardian revealed that the IPCC’s WGI had faced pressure from Russia to include a vague endorsement of geoengineering schemes as a “possible solution” (2) but ultimately settled on a statement indicating that geoengineering measures "have been proposed." WGI’s report cited "limited evidence" for the evaluation of geoengineering measures.
Some observers saw the dearth of data as opening the door to testing of geoengineering schemes. Geoengineering proponent Ken Caldeira told Nature that he saw the inclusion of geoengineering in WGI’s report as "a reflection of growing governmental interest in these ideas." (3)
In WGI’s Summary, the reference to geoengineering was gratuitous and out of place. Working Group I's mandate is to report on climate science, not solutions. The report contained no reference to solar power, electric cars, agro-ecology or other potential ways of reducing carbon in the atmosphere.
"We are now seeing a deliberate attempt to exploit the high profile and credibility of this body in order to create more mainstream support for extreme climate engineering," ETC's Silvia Ribeiro told the Guardian last September.
Battle in Berlin?
Some are anticipating a bigger fight over geoengineering in WGIII, which covers mitigation of the effects of climate change. WGIII meets in Berlin from April 7-11. At that negotiating session, geoengineering advocates are expected to pull out all the stops to get stronger pro-geoengineering language into its Summary for Policymakers.
A major coup for geoengineering advocates would be a mention in the AR5 Synthesis Report,  a unified message from the contributions of all three Working Groups, due out by the end of 2014. The IPCC’s AR5 is a major influence on international climate change policy, including by informing the work of the UN Framework Convention on Climate Change.
-30-
For additional comments or information, please contact:
Neth Daño: neth@etcgroup.org
Notes to editors:
ETC Group has produced a short background briefing about the IPCC and geoengineering, available here: http://www.etcgroup.org/content/ipcc-ar5-geoengineering-march2014
Some photos of WGII meetings in Yokohama can be found here:http://www.iisd.ca/climate/ipcc38/
1. Open Letter to IPCC on Geoengineering, July 2011: http://www.handsoffmotherearth.org/2011/06/lettertoipcc/.
2. Martin Lukacs, Suzanne Goldenberg and Adam Vaughan, “Russia urges UN climate report to include geoengineering,” The Guardian, 19 September 2013:http://www.theguardian.com/environment/2013/sep/19/russia-un-climate-rep...
3. Daniel Cressey, “Climate report puts geoengineering in the spotlight,” Nature News, 02 October 2013: http://www.nature.com/news/climate-report-puts-geoengineering-in-the-spo...
Related Issues:
Climate & Geoengineering
Related Fora:
Climate: UNFCCC, IPCC