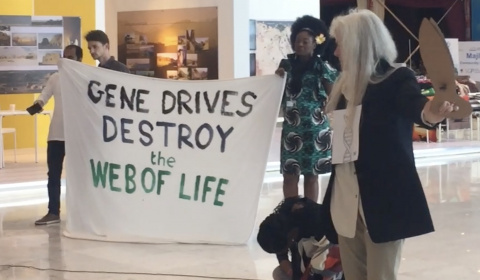 Friends of the Earth International and ETC Group

29 November 2018, Sharm El Sheikh, Egypt: Today, the UN has made a significant global decision on how to govern a high-risk, new genetic engineering technology – gene drives[1].

‘This important decision puts controls on gene drives using simple common sense principles: Don’t mess with someone else’s environment, territories and rights without their consent,’ explains Jim Thomas, Co-Executive Director of the ETC Group. ‘Gene drives are currently being pursued by powerful military and agribusiness interests and a few wealthy individuals. This UN decision puts the power back in the hands of local communities, in particular Indigenous Peoples, to step on the brakes on this exterminator technology’.

The Convention on Biological Diversity decision (see Box) also requires that, before an environmental gene drive release, a thorough risk assessment is carried out. With most countries lacking a regulatory system for the technology, it requires that new safety measures are put in place to prevent potential adverse effects. The decision acknowledges that more studies and research on impacts of gene drives are needed to develop guidelines to assess gene drive organisms before they are considered for release[2].

‘In Africa we are all potentially affected, and we do not want to be lab rats for this exterminator technology,’ notes Mariann Bassey-Orovwuje of Friends of the Earth Africa, and chair of the Alliance for Food Sovereignty in Africa. ‘Farmers have already marched in the streets of Burkina Faso to protest genetically engineered mosquitoes and we will march again if they ignore this UN decision. We are giving notice now that potentially affected West African communities have not given their consent or approval to this risky technology’.

The agreement to seek and obtain consent may immediately impact the most high-profile (and well-funded) gene drive project, by researchers at London’s Imperial College who aim to release genetically engineered mosquitoes in Burkina Faso as a step towards future gene drive mosquito releases. Contrary to Target Malaria’s claims, people living in the villages targeted for potential release have not been consulted, nor given consent.

This decision follows a campaign by hundreds of organizations, along with concerns expressed by several governments represented at the UN, who called for a moratorium on the environmental release of gene drives[3].

The globally-agreed decision requires that governments must seek the approval of ‘potentially affected indigenous peoples and local communities’ prior to considering any release of gene drives, including experimental releases. Given that gene drives are designed to spread through a species and across geographic regions – a novel feature of this form of genetic engineering – any environmental release could potentially affect communities far beyond the single release site and it will now be necessary to seek wider consent. This puts an important halt to gene drive releases moving forward. The UN decision justifies controls on gene drive releases because of their potential impact on the ‘traditional knowledge, innovation, practices, livelihood and use of land and water’ of Indigenous Peoples and local communities.

Guy Kastler from La Via Campesina, a global movement that represents over 200 million peasants from 182 organizations in 81 countries, said: ‘The prospect of this technology brings unprecedented risks that we can’t accept. The UN should have decided a clear moratorium on gene drives. La Via Campesina calls on peasants of the world to oppose in every country the implementation of this technology, which can potentially exterminate our crops or animals and other elements of biodiversity essential to our productions and livelihood’.

Research reported this week has shown that Anopheles mosquitos (one of the insects that carry the malaria parasite) may routinely be blown long distances across Africa by winds at upper atmospheric levels[4]. This could potentially expand the geographic area of ‘potentially affected’ Indigenous peoples and local communities to the entire continent.

The UN decision comes in the same week that the Cayman Islands decided to end trials of experimental genetically engineered mosquitoes amid reports that infectious mosquito populations increased instead of declining[5]. Caribbean countries were among those supporting a moratorium on gene drives.

Besides the requirement for consent, the conditions require that risk assessments are carried out and risk management measures put in place ‘to avoid or minimize potential adverse affects’.

The decision recognizes that before these organisms are considered for release into the environment, more research and analysis are needed, and the UN should develop specific guidance to evaluate potential impacts on biodiversity and communities.

Such guidance is now agreed to be developed through a ‘Risk Assessment Ad Hoc Technical Expert Group,’ established today under another decision. Because the development of formal risk assessment guidance is set to take some years, this part of the decision may also practically act as a further brake on the release of gene drive organisms.

Decisions made at United Nations, 29 November 2018

9.         Calls upon Parties and other Governments, taking into account the current uncertainties regarding engineered gene drives, to apply a precautionary approach,[7] in accordance with the objectives of the Convention, and also calls upon Parties and other Governments to only consider introducing organisms containing engineered gene drives into the environment, including for experimental releases and research and development purposes, when:

(a)        Scientifically sound case-by-case risk assessments have been carried out;

(b)        Risk management measures are in place to avoid or minimize potential adverse effects, as appropriate;

10.       Recognizes that, as there could be potential adverse effects arising from organisms containing engineered gene drives, before these organisms are considered for release into the environment, research and analysis are needed, and specific guidance may be useful,[9] to support case-by-case risk assessment;

[2] Such guidance will now be developed through a ‘Risk Assessment Ad Hoc Technical Expert Group’ also established today under another decision. Since the development of that formal guidance is likely to take some years this may also practically act as a further brake on the release of gene drive organisms.

[9] The Subsidiary Body on Scientific, Technical and Technological Advice has recommended that the Conference of the Parties serving as the meeting of the Parties to the Cartagena Protocol on Biosafety (recommendation 22/2) consider the need for specific guidance on risk assessment of living modified organisms containing engineered gene drives at its tenth meeting.