Will Unicorns Save us from Climate Change? (BECCS won’t.) 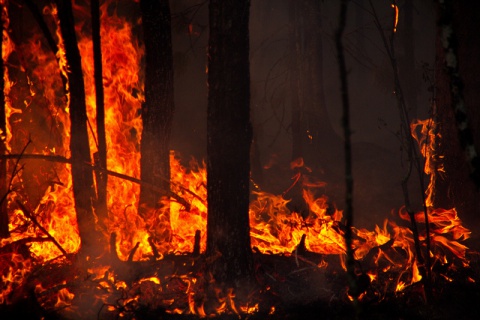 OCT 31, COPENHAGEN — It’s hallowe’en at the Intergovernmental Panel on Climate Change (IPCC)’s 40th plenary session, but as the world’s premiere climate science body releases its latest report, observers are wondering if the planet has been played a very nasty trick indeed. The IPCC appears to have embraced carbon geoengineering in the form of CCS and BECCS (Bioenergy with Carbon Capture and Storage), which it now claims can achieve “net zero emissions” somewhere in the second half of the century. But critics are calling the move a case of dangerous “magical thinking”.
“IPCC’s AR5 synthesis report doesn’t quite say that a herd of magical unicorns can save the climate, but it may as well have,” said Neth Dano, Asia Director for ETC group. “Frankly, based on what we know about unicorns and BECCS, magical unicorns are a kinder bet to reduce the carbon in the atmosphere.”
“BECCS is magical in the worst way: it likely won’t work, and it’s leading climate policymakers down a dead-end road that gives oil companies an excuse to keep pumping CO2 into the atmosphere.”
Reuters reported on October 31 that a permissive approach to “overshoot” is a theme emerging from the AR5 report. This thinking proposes that countries can exceed their emissions targets on the risky assumption that new technologies will be invented in the years to come that will mop up excess carbon from the atmosphere. This “pollute now, clean up later” principle is a radical departure. Previous IPCC reports more sensibly recommended reducing emissions enough to keep global levels of atmospheric carbon within safe limits.
BECCS, which is largely a hypothetical technology, is the poster child for this new “overshoot” approach. It is part of a suite of imagined geoengineering approaches called Carbon Dioxide Removal (CDR) techniques. The hype surrounding BECCS provoked at least one media outlet to declare last year that “burning trees 'may help reverse global warming'.”
The idea behind BECCS is to grow trees and other biomass (which will absorb carbon) and then burn that in special power plants that capture the carbon emissions before they escape into the atmosphere. In this way, energy can theoretically be generated with “net zero” emissions, and even take CO2 out of the atmosphere.
Critics have poked many holes in the concept:
“The fossil fuel lobbyists are likely popping champagne after this move,” said Pat Mooney, ETC Group’s Executive Director who was in Copenhagen for the IPCC plenary. “The fossil fuel lobby has 55 trillion dollars in infrastructure and 28 trillion dollars in investment to defend.”
“They would rather have governments chasing after BECCS, unicorns or anything else instead of taking meaningful action to reduce fossil fuel use,” Mooney added. “By redirecting attention toward these magical nonexistent technologies, they hope to send the climate negotiations on a long and costly technological snipe hunt.”
“By reccomending a nonexistent technology and using it to justify emissions ‘overshoot," the IPCC risks undermining its own credibility,” said Jim Thomas, Programme Director of ETC Group. “This is dangerous territory, because the IPCC is a globally-respected reference point for policymakers–the IPCC report is strong on the effects of climate change and the need for action, but lending support to BECCS is a step backwards.”
“If we lose the IPCC to corporate magical thinking fuelled by a cash-rich oil sector, it would set back efforts to reduce climate emissions by decades,” Thomas added. “Adopting BECCS could also pave the way for other crazy geoengineering schemes such as shooting sulphur dioxide into the atmosphere.”
For more information, contact:
Neth Dano, ETC Group Asia Director, neth@etcgroup.org
Pat Mooney, ETC Group Executive Director: pat@etcgroup.org, +1 613 2400045
Jim Thomas, ETC Group Programme Director: jim@etcgroup.org, +1 514 516 5759
For further reading on BECCS:
Ecological limits to terrestrial biological carbon dioxide removal
by Lydia J. Smith, Margaret S. Torn
Science or propaganda? New hype about Bioenergy with Carbon Capture and Storage
by Rachel Smolker
photo: Tatiana Bulyonkova
Related Issues:
Climate & Geoengineering
International Governance
Related Fora:
Biodiversity: CBD, SBSTTA, IPBES
Climate: UNFCCC, IPCC