Our new game "Disruption!: a battle for the future of food" 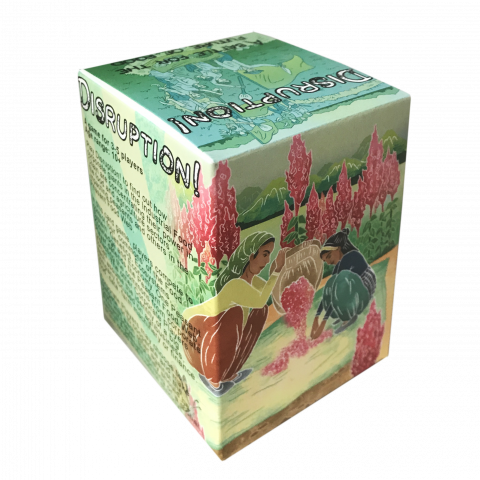 Over the last few decades, the way in which people grow, share and eat food around the world has become a tale of two conflicting food systems – which we call the Industrial Food Chain and the Peasant Food Web. The tension between these two systems is the basis of our new game Disruption! A battle for the future of food.

The ‘Industrial Food Chain’ is a term we use to describe the production of commercial food that is sold in supermarkets, restaurants and online, with each stage linked to powerful global markets. But this only describes a small part of the activity and relationships that really nourish most of the world’s people: food that is grown outside the Industrial Food Chain accounts for most of the world’s nutrition, especially among economically poor and peasant communities – including fisherfolk, livestock-keepers, pastoralists, hunters and gatherers, rural communities and also many urban gardeners. We describe the sharing of food within these communities, and their relationships with territories and ecosystems, as ‘The Peasant Food Web’.

Did you know? Our research shows that the Peasant Food Web provides food for over 70% of the world’s people. But its resilience is threatened by the behavior of the polluting, wasteful and expensive Industrial Food Chain (for every US$1 consumers pay to Chain retailers, society pays another US$2 for the extensive health and environmental damage caused by the Chain).

In Disruption! A battle for the future of food, players find themselves taking the side of either the Peasant Food Web, or the Industrial Food chain and compete to control the four ‘commons’ of the Food System: Genetics, Ecosystems, Knowledge and Economy. One player defends the commons and the Peasant Food Web that nurtures them. The others assume the identities of big corporations in the Industrial Food Chain aiming to grab land and resources. But they should be careful! A peasant uprising could shift control quickly!