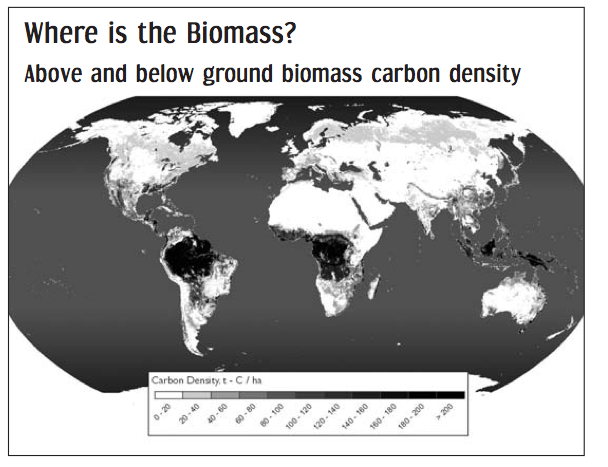 “If you look at a picture of the globe...it’s pretty easy to see where the green parts are, and those are the places where one would perhaps optimally grow feedstocks.” – Steven Koonin, US Department of Energy Under Secretary for Science and former head of research at BP, 2009

“A new international division of labour in agriculture is likely to emerge between countries with large tracts of arable land – and thus a likely exporter of biomass or densified derivatives – versus countries with smaller amounts of arable land (i.e. biomass importers, e.g. Holland). The biggest biomass export hubs are expected to be Brazil, Africa and North America.” – World Economic Forum

The tropics are also where biomass replenishes the quickest and where marine biomass, principally phytoplankton, is most productive. Not coincidentally, these areas of the planet where biomass is already most concentrated are now attracting the interest of companies wanting to produce biofuels, biobased chemicals and bioelectricity. Brazil in particular has witnessed a massive increase in bioeconomy-driven investment. Indeed, the World Economic Forum has suggested that “a new international division of labour in agriculture is likely to emerge” between biomass-producing tropical countries and Northern countries – although what is so new about this division of labour is unclear.

The industry has realized that “geography is destiny,” says Mark Bünger, who tracks the bioeconomy as a Research Director at Lux Research. Bünger explained to Technology Review’s Antonio Regalado that “only a few places on the planet have the rain, sun, and land mass needed to make biofuels at the scale and price that can have a real impact.”30 While Brazil ranks first, sub-Saharan Africa is a close second, evidenced by a rush of land claims and rising interest in planting sugarcane in the region.31

“As we looked at the world and looked at where the lowest cost, largest scale biomass was, we found that Brazil really was the Saudi Arabia of renewables.” – John Melo, CEO of Amyris Biotechnologies Inc.

For references and Sources see The New Biomassters (2010) p8