Full links and background on the 2012 ocean fertilization scheme by HSRC. 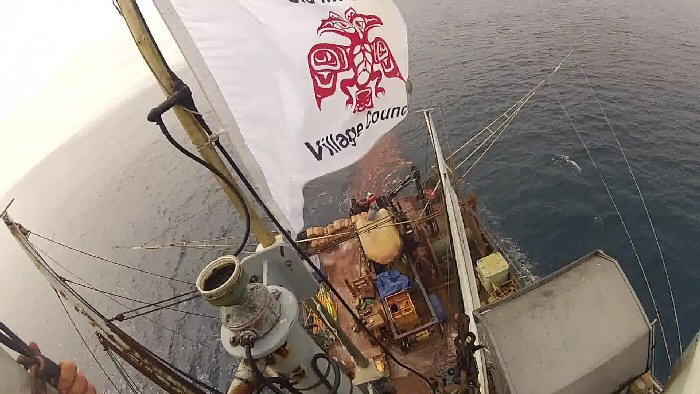 In October 2012 ETC Group uncovered that a commercial geoengineering firm had quietly carried out the world's largest geoengineering deployment to-date (in July 2012).

The Haida Salmon Restoration Corporation (HSRC), which names former Planktos CEO Russ George as both Chief Scientist and Chair of the Board, dumped at least 110 tonnes of iron powder into the Pacific Ocean west of the islands of Haida Gwaii (Canada). The iron dump might have been responsible for some or all of a 10,000 square kilometer plankton bloom that was captured in satellite images and was visible from space. To finance this risky scheme, HSRC reportedly used 2.5 million dollars belonging to an indigenous community, promising the community would receive (non-existent) carbon credits in return. When the news became public as a result of ETC Group's investigations, it caused a wave of concern among scientists, governments, the public and of course the people of Haida Gwaii. HSRC have since said they intend to carry out further ocean fertilization dumps.

ETC Group has called on the Canadian government to investigate HSRC for carrying out this ocean fertilization dump and to prosecute as appropriate. We also urge HSRC and the Old Massett Village Council to announce that they will not carry out any further geoengineering activities. ETC Group continues to press for a full ban on geoengineering at the international level.

If you would like to support our work to stop geoengineering, please consider making a donation here.

You can also subscribe to our updates by clicking on the follow us/subscribe button on the right of this page,  follow us on Facebook or join the international campaign against geoengineering: Hands Off Mother Earth! (HOME)

The Case Study - Read our information backgrounder explaining how ETC Group uncovered the Haida Gwaii ocean fertilization dump and what happened next.

The Media Story - ETC Group's exposé of the ocean fertilization dump west of Haida Gwaii touched off a storm of global concern and condemnation. See here for acompilation of some of the media reporting on this topic.

The Bigger Story - ETC Group is working towards a global ban on geoengineering. We believe geoengineering is dangerous and an inequitable and false solution to climate change. You can read all of our research and background materials on geoengineering here. A good introduction is our short report: Geopiracy: The Case Against Geoengineering.

The Oral Story - The following multimedia resources provide more information. You can listen to them online:

ETC Group is an international non-profit civil society organization. We track emerging technologies and corporate strategies that impact human rights, culture and the environment. We are small but effective at advocating for change. We rely on philanthropic contributions and public donations to carry out our work. You can learn more about our finances and how to donate here. We encourage you to look around our website and see the work that we do.