Voices from COP15 in Montreal

An interview with Christine von Weizsäcker of ECOROPA 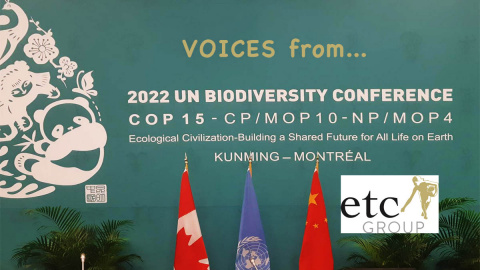 (Click on the link below to listen to the interview.)

As preliminary meetings of the Open-Ended Working Group wrap up and official COP meetings begin, ECOROPA’s Christine von Weizsäcker talks to ETC Group about evaluating new genetic technologies and the rights of indigenous people in the Global Biodiversity Framework (GBF).

ETC Group: We are here at the COP 15 in Montreal, and I'm with Christine von Weizsäcker from ECOROPA, who's going to tell us about what we are looking out for at this COP, and some of the main issues.

Thank you so much for speaking with me. Can we start with an introduction: what work do you do at ECOROPA?

Christine: Oh, that's very simple, I'm their president. ECOROPA exists since 1976 when some people in Europe, the fathers and mothers of the environmental movement, thought that perhaps the ecological crisis and all the trouble with nature is not a national issue only. They sat together, they were writers and politicians and farmers and scientists, and they sat for three years discussing, and then they saw that you're not going to have ecology without democracy and North-South justice. We need very little money, which doesn't make us dependent and lets us still focus on policies and not on fundraising.

ETC Group: The official COP has not actually begun. We are here at the Open-Ended Working Group. It seems very quiet in the hallways. Can you first begin by explaining to me what is the difference between the meetings that are happening now and the official COP that's going to start in a few days?

Christine: To put it bluntly, the event that the journalists are talking about, and that is called the COP, is the result of a series of negotiations. More or less, 85% to 90% of the text is finalized before the COP starts, before the big shots come. Being present here in the preparatory negotiations is absolutely crucial because if we lose good text here, it's lost in the COP and there will be no decision on it. The real fights are here. The COPs only have the final trade-offs between different issues. These meetings are called the Open-Ended Working Group, and involves preparing a text for a Global Biodiversity Framework, which is more or less a 10-year plan. It's from 2020 to 2030.

It only leaves us eight years to achieve something against this terrible, dreadful biodiversity loss, which is going to really be violent against many people, and mainly poor people around the world who depend on what is called “ecosystem services” - food, water, shelter, clean air, health, their diets. Their whole incomes depend on intact ecosystems. These people tell me, “Governments failed us, the market failed us. It's only mother nature that keeps us alive.”

ETC Group: People have called the COP the “Paris Agreement for biodiversity,” and as you're saying, the things that are decided now will be important for the next 10 years. What are some of the major issues that you are following in these few days before the COP starts?

Christine: One thing, as I've already pointed out, is the rights of indigenous people, small holder farmers, family farmers, local people. In a way, the solution is not going to be here, neither in Paris, nor in Montreal. The solution will be on the ground, but the decisions here make it easier for good people if there are good decisions here and bad for bad people, if it's bad decisions. The main point is that, for instance, smallholder farmers can say, “No, we are not backward, there is a gigantic international agreement by 196 countries out of the 198 existing ones.”

ETC Group: We're outside one of the rooms here. A lot of the civil society groups are very concerned about Target 17 in the text that is discussed at the moment. Can you tell me about what is Target 17?

Christine: Well, Target 17: I have to start with the promises of genetic engineering. I was involved in the first round of genetic engineering. What didn't they promise, about “there's going to be no hunger around the world, agriculture with no pesticides.” The amount of pesticides increased, and recently in the last past two years, hunger increased terribly again, as the Human Development Report tells us.

You have this big wave of promises of new genetic technology like CRISPR-Cas and similar ones. This is being dealt with here because the convention has an article about addressing the risks of modern biotechnology, and it ended up in a protocol, meaning real obligations to states. Now, nobody, of course, could think of synthetic biology then, it's new. The question is whether you include this with a precautionary principle, meaning better safe than sorry. We wouldn't be here if our ancestors hadn't applied the precautionary principle. None of us would be here.

We must look closely and assess, what are these promises? Are they only promises, or is it useful? For this, we need horizon scanning, technology assessment, monitoring, because some of the issues you don't know before hand, they only show up later. This is a very important issue because if people believe in techno-fixes, they're not going to change, neither for climate change, nor for maintaining intact ecosystems, because they are being promised a techno-fix a way out and can lean back. People do like to lean back, not to have to say, "What am I going to do for myself, my children, my grandchildren?" I'm old enough to really have grandchildren, 13 grandchildren as a matter of fact. I have a lot of reason to be here.

We must look closely and assess, what are these promises? Are they only promises, or is it useful? For this, we need horizon scanning, technology assessment, monitoring, because some of the issues you don't know before hand, they only show up later. This is a very important issue because if people believe in techno-fixes, they're not going to change, neither for climate change, nor for maintaining intact ecosystems, because they are being promised a techno-fix a way out and can lean back.

ETC Group: The Target 17 in the text that was just being discussed, is about assessing new technologies before they come into being, for example synthetic biology. Can you give an example of some of these technologies that may be pushed on to countries or communities without assessment or monitoring?

Christine: Well, in Europe, there is an attempt to exempt precision-breeding technologies, and they use PR terms. Who doesn't want to be precise? Breeding sounds so nice, it doesn't look like test tubes and very expensive machinery. One of the examples, of course, is to say we get rid of malaria in the world. One of the tools they have is to say, we include genes that make the offspring sterile.

Christine: That's called gene drives and it forces populations out of existence. You could say, well, yes for the malaria mosquitoes. Mosquito's nice. Some other insect we don't like, and ticks we don't like. Firstly, gene drives don't hold all the time, so it's going to come back. Secondly, if you have no mosquitoes in the water, you're not going to have fish. It really would be a task to look all the influences things have.

ETC Group: Before they are put in place.

Christine: Before they're released. Well, with some things, you could release and then have time to assess, but not with gene drives. Once they're out, they're out of control. This is what scientists already are thinking about. We delete all breeds, old-fashioned breeds from the surface of the earth. We just put them into collections somewhere, and then--

ETC Group: Breeds of what?

Christine: Breeds of animals, of plants, crops, domesticated animals. We drive all this old stuff out. We all don't like certain things momentarily, but we are not allowed to kill them.

ETC Group: I was in this room just a few minutes ago, and a lot of the discussion was about UNDROP and UNDRIP. Can you tell me what these stand for, these terms?

Christine: Well, these terms are very dear terms. They sounds funny. UNDROP, UNDRIP, never heard of it. UNDRIP means United Nations Declaration on the Rights of Indigenous Peoples. You may remember that at the very beginning of the United Nations, which really was a peace effort of humanity, after the Second World War, you had the general declaration on human rights. By being mentioned, and often by being used in court decisions, it became more and more solid. Now it's common international law. There are similar declarations now recently on the rights of indigenous peoples, which is UNDRIP.

Even more recently, you have UNDROP, which means the United Nations Declaration on the Rights of Peasants and people living in rural areas. Most people who protect and sustainably use ecosystems, biological diversity, they are poor people living in local communities. They know how to do it, and they are deeply threatened by modern market mechanisms. They lose lands, they lose the territories that they really protect, and they very often protect them at the cost of their lives sometimes better than the national protected areas.

You can see it, for instance, in Mexico, areas guarded by indigenous peoples have a closed canopy. The forest cover, the leaf cover, is intact. Protected areas have huge logging holes. It would be terrible to keep up the tradition of robbing land from indigenous peoples, and violating their rights and turning the land into protected areas where only tourists and scientists and filmmakers can go into. One of the big attempts here is to stop the conflict between human rights and environmental protection. If we lose that one, we really are lost. If we lose the trust of the local communities, their creativity, their practices, their attention to detail, their solutions, we are lost.

ETC Group: What do you hope will be the outcome after all these days, and after the COP? What's your hope for this particular COP 15?

ETC Group: When you say we, who do you mean?

Christine: The civil society, the farmers, the indigenous peoples. We are weak partners, but we have friendships. We have trust amongst each other. We are very attentive. Even slight wins, sometimes surprising wins, every one of our wins is a surprise against very strong forces that run against it, and can be used by other people to make life a little easier for them. As a scientist, I could say, do a prognostics, say, what will be the outcome, will it be positive? I don't know. If I would run into thinking about will we win or not, I would not be attentive enough to really look at the small chances we have. There are a surprising lot of decent people, even in government. If you would look at the power relationships between all those huge numbers of corporations, lobbies sitting around here in Montreal, you would say, well, it's not going to be, but wouldn't you take the smallest chance if you could help?

Even slight wins, sometimes surprising wins, every one of our wins is a surprise against very strong forces that run against it, and can be used by other people to make life a little easier for them.