Fancy a technofix mess for dinner?

Why we boycotted the UN Food Systems Summit 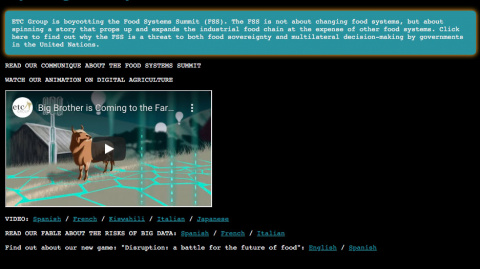 The rejection of the Food System Summit (FSS) by so many people, activists, organisations and movements around the world shows that the defence of food sovereignty remains strong.

The outcomes of the FSS, held in New York on 23 September 2021, could result in the world’s food systems being hijacked by the industrial food chain. The FSS approach threatens to destroy food sovereignty and replace it with the techno-giants’ version of ‘food systems’. The summit was specifically designed to spin a story that props up those techno-giants and expands the industrial food chain at the expense of other food systems.

This is the story: The Food System Summit’s proponents argue that the “food system” is broken, that population growth and climate change mean that we will not be able to feed everyone, and that only new technological developments can save us. But this is a myth that has been carefully constructed by those who stand to profit from it, who have been using the summit to enable the expansion of the corporate-controlled industrial form of food production.

Indeed, when the big bosses of food transnational companies like Unilever talk about fixing the “broken food system”, it ought to raise questions about which food system they are actually talking about and who benefits from repairing it. Many people think the “broken food system” should refer specifically to the industrial food chain itself – that part of the global food system under the control of corporate interests that depends heavily on chemical and fossil fuel inputs, promotes crop uniformity, and produces food mainly for the commercial market in developed countries and the upper and middle classes in developing countries.

Furthermore, the industrial food chain is not simply broken – it is actively damaging. It uses 75 percent of the world’s agricultural land, consumes at least 80 percent of freshwater and is responsible for at least 90 percent of greenhouse gas emissions from agriculture.

The Food System summit was designed to create a specific political moment when that “broken food chain” narrative could be significantly advanced. It provided a stage for corporations and supporting philanthropists to present themselves as heroes who can provide “game-changing” solutions that will “end hunger and malnutrition.” Miraculous promises are being made about the benefits of advancing intentionally vague concepts like “precision agriculture” and the “digital frontier”, “nature-positive production”, “climate smart agriculture”, the “blue economy”, and “de-risking” and “re-routing” farming and rural livelihoods.

The underlying purpose of the FSS, which was not designed to create policies or global agreements directly, was to try to establish parameters defining the path that governments will choose to prioritise, promote and finance in the future – and what and who they will reject.

Analysis by ETC Group shows that the Food Systems Summit architects ignored fundamental elements of the real world that we currently live in. They intentionally distracted attention from the hard fact that it is this same approach that has caused multiple climate and ecological crises. They obfuscated the impact that empire, colonialism and racism, and more recently neoliberal globalisation, have had and are still having on local and Indigenous food cultures around the world. The summit’s myths side-step the fact that it is peasant farmers and smallholders that feed 70 percent of the world’s people. And they ignore the known impact that the industrialised, homogenised food production system is having on people’s health.

A detailed analysis also shows that the Food Systems Summit synthesis papers are not as “game changing” as they claim to be. The FSS’s backers have no intention of changing the economic system at the root of current crises. Their intention is to entrench and expand it for their own profit.

The potential impacts of this unsustainable trend could be severe and irreversible. In particular, the digitalisation of agriculture across the world could further marginalise traditional knowledge about food production, thereby eliminating food sovereignty (which holds up the right of food producers, including farmers, smallholders, fisherfolk and Indigenous people, to make their own decisions about food production). This looks set to drive a process of agricultural de-skilling and also aggravate rural-urban migration and associated societal woes including the climate crisis. You don’t have to be cynical to call this an attempt to hijack global food systems.

A genuine people-led summit on food systems and food sovereignty is needed, to challenge the industrial food system’s impact on food, health, climate and biodiversity. It should have, at its very core and foundation, the interests and meaningful participation of the peasants, smallholders, pastoralists, fishers, Indigenous peoples and urban gardeners that feed the overwhelming majority of the planet’s population.

We need an entirely different summit with outcomes that help shape the deliberations of the UN’s Committee on Food Security, which is already tasked with addressing the concerns the FSS purports to resolve, and has well-established mechanisms concerning the participation of rights-holders and their rights to self-organise.