Stop Geoengineering - Our home is not a laboratory 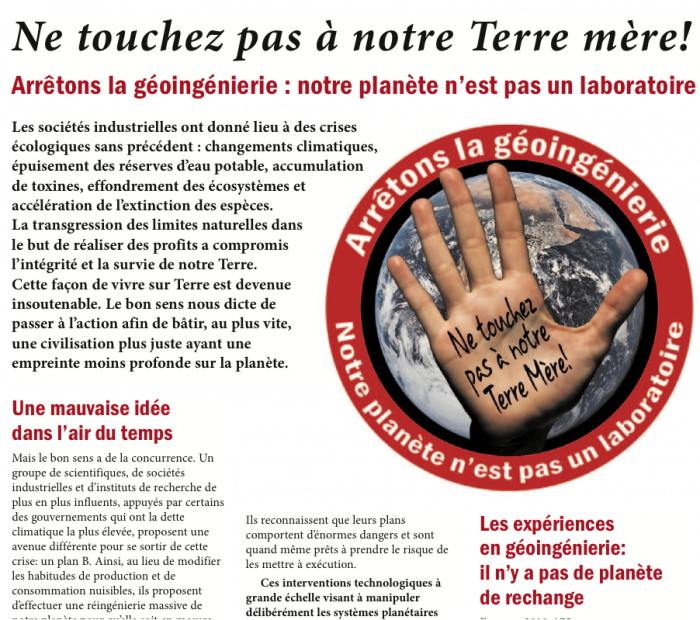 Industrial societies have produced unprecedented ecological crises: climate change, depleted fresh water, build-up of toxins, collapse of ecosystems and accelerating species extinction. The transgression of natural limits for private gain has compromised the integrity and survival of our living planet, Mother Earth. This way of living on the Earth has become unsustainable. Common sense says we must act to build a fairer civilization, one that steps more lightly on the planet – and fast.

A bad idea whose time has come

But common sense isn't the only option on the table. A group of increasingly influential scientists, corporations and think tanks, backed by some of the governments that carry the largest climate debt, are proposing a different path out of this crisis: a Plan B. Rather than changing harmful production and consumption patterns, they want to massively  re-engineer our planet so that it can withstand the ravages of industrial societies. Their proposals to “fix” global warming range from changing the chemistry of the oceans to polluting the upper atmosphere with sulphur particles.

They are now under active consideration by politicians in the US and the UK, with more investment being advocated by the UK Royal Society and its industrial allies. Some of the world’s richest men (eg. Richard Branson and Bill Gates) and the most powerful corporations (eg. Shell, Boeing) are getting involved.

There is no reason to trust that a small group of men from industrialized  countries will geoengineer the planet with integrity or intelligence, or keep the rights of vulnerable peoples in mind. They acknowledge that these plans carry huge risks and they are ready to gamble.

“If we could come up with a geoengineering answer to this problem, then Copenhagen wouldn’t be necessary. We could carry on flying our planes and driving our cars.” - Richard Branson, billionaire chairman of Virgin Group