Synthetic Biology and The Next Assault on Biodiversity and Livelihoods 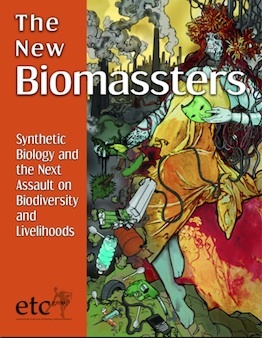 Communiqué number:
104
ETC Group groundbreaking report lifts the lid on the emerging global grab on plants, lands, ecosystems, and traditional cultures.
The New Biomassters - Synthetic Biology and the Next Assault on Biodiversity and Livelihoods is a critique of what OECD countries are calling 'the new bioeconomy.' Concerted attempts are already underway to shift industrial production feedstocks from fossil fuels to the 230 billion tones of 'biomass' (living stuff) that the Earth produces every year -not just for liquid fuels but also for production of power, chemicals, plastics and more.
Sold as an ecological switch from a ‘black carbon’ (ie fossil) economy to a ‘green carbon’ (plant-based) economy, this emerging bioeconomy is in fact a red-hot resource grab of the lands, livelihoods, knowledge and resources of peoples in the global South, where most of that biomass is located.
Enabling the next stage of this new grab is the adoption of synthetic biology techniques (extreme genetic engineering) by a wave of high-tech companies partnering with the world’s largest energy, chemical, forestry and agribusiness corporations.
The New Biomassters:
Read it in other languages:
French
Related Issues:
Synthetic Biology
The Bioeconomy
Related Fora:
Biodiversity: CBD, SBSTTA, IPBES