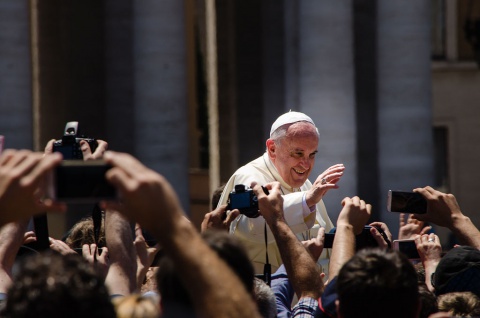 Pope Francis’s sympathies for “Liberation Theology” – the radical Catholic message of Latin American clergy of the 1960s and 70s that called for social change – has been uncertain. He was a young priest when Liberation Theology was at its height and didn’t speak up when it fell out of favour with the Catholic hierarchy. In 2014 and again this year, however, Francis met with social movements and their supporters (including ETC Group) and will meet with them again in Bolivia in a few weeks time, to discuss what some have described as a second phase of Liberation Theology. The Pontiff’s new encyclical, Laudato Si', certainly echoes the philosophy's emphasis on social justice.

While the focus is on climate change and the need for revolutionary action to protect “Sister Earth” (para 53) and humanity, the Pope deals harshly with the fossil fuel industry, demanding an urgent withdrawal from fossil carbon (para 26) and rejecting industry’s enthusiasm for carbon credits as a dangerous distraction. (para 171) But he goes beyond the Old Fossils to broadly confront corporate power and calls for an end to private-sector dominance over national governments. Pope Francis wants a stronger multilateral system (para 175) in which governments recover their policy role and where popular participation is encouraged. (para 14 and 135 but throughout the text)
Pope Francis critiques the corporate control of technologies in general and warns repeatedly that governments and industry’s “blind confidence” in techno-fixes is dangerous. (para 14) An entire chapter of the encyclical focuses on the promises and threats of technology and the risk for humanity of unassessed technologies. (para 102 – 121 inclusive) Recalling his mentor, Pope John XXIII in the early 60s,  Francis gives priority to socioeconomic solutions to social problems as embraced by Liberation Theology over Liberation Technology – the treacherous assumption that humanity can let industry invent technological responses for all our economic, environmental and equity issues. The encyclical makes a clear call for technology assessment and the Precautionary Principle (paras 135, 177, 186, 187 and 188).
This is a message for the climate change negotiators who will be in Paris at the end of this year. Clearly, Francis doesn’t buy the bold assertions of the G7 and the fossil majors that a combination of voluntary reductions and the invention of mythical unicorn technologies means that the companies can continue to extract their trillions of dollars in carbon assets and still reach “Net Zero” by 2100. Francis has been joined by many environmentalists and economists – including the Financial Times – in acknowledging that the conclusions being crafted for Paris are likely to increase CO2 levels from today’s 400 ppm to 700 ppm by 2100 and increase temperatures well past 2°C (as the G7 have pledged) to at least 3.5°C.
Although the encyclical does not address climate geoengineering or, more specifically, the threat of planet-scale techno-fixes such as Solar Radiation Management (blowing sulfates into the stratosphere to reduce sunlight and lower temperatures) or BECCS (Bioenergy Carbon Capture and Storage – stuffing CO2 back into the sea or soils) its tone leaves little doubt that Francis would not welcome a technological elite controlling the Earth’s thermostat.
The Pope’s critique of corporate power also addresses oligopolies in the food chain. (para 134) In a passage that bears a striking resemblance to ETC’s little booklet, “Who Will Feed Us?” Francis argues that small farmers protect the Earth, strengthen diversity and grow most of the world’s food with very little land and resources. He calls for at least an open participatory dialogue on genetically-engineered crops (para 135); warns of misleading information and secretive research; and explicitly rejects the introducing of “infertile seeds” (para 134) – i.e.  Terminator Technology, or suicide seeds that die at harvest time. This warning comes at a moment when the Brazilian Congress may pass legislation commercializing Terminator despite a UN moratorium blocking the technology.
Francis’s message is equally valid for the UN’s Sustainable Development Goals and the set of government negotiators now in New York and soon to reconvene in Ethiopia in mid-July to sort out the money issues that will guide national development strategies and international aid budgets from now to 2030. The UN will adopt 17 Sustainable Development Goals  – including 169 Targets – that heavily rely on the invention of new technologies to address social and environmental needs. Despite this dependence on not-yet-existing technologies, OECD states are balking at a G-77 and China proposal – championed by Brazil, India and Egypt – to establish a Technology Facilitation Mechanism that would not only consider issues of technology transfer but also technology assessment. Even though 18 European states as well as the EU in Brussels have independent parliamentary offices of technology assessment, the UK and USA  are adamantly opposed to such a technology ‘early listening’ forum at the UN.
To be clear, this Pope is not opposed to science and technology. Indeed, he is throwing his weight behind the independent science-based IPCC and Francis strongly supports the role of science in addressing climate change and many other social issues. Mindful of the Church’s experience with Galileo and Copernicus, the Pope’s clearly on the side of science – but not on the side of profit-driven and industry-directed technologies that may have direct or collateral damage for Sister Earth and her citizens.
This encyclical will certainly influence the negotiations in Paris but it will also be remembered for its broad critique of corporate control over both governments and technology. However, its greatest legacy may be in the Pontiff’s call for a renewed multilateral system led by governments and engaging civil society. As the World Social Forum warned earlier this year, COP21 (the 21st Session of the Conference of the Parties) in Paris in December – if it doesn’t meet the expectations of the Pope and of the people – should not be allowed to bumble on to COP22 next year but should lead to COP1 – a Congress of the Peoples with a new start in a revitalized United Nations. And, in Ethiopia in July, the UN should establish a facility for technology assessment and take the first step in liberating technology from corporate oligopoly.
Related Issues:
Technology Assessment
Climate & Geoengineering
Related Fora:
Climate: UNFCCC, IPCC