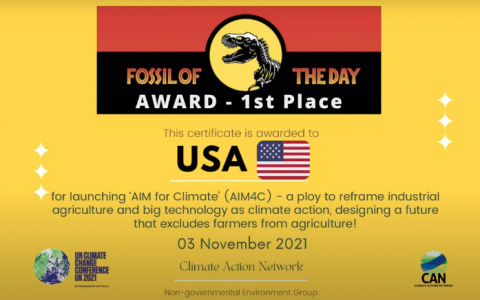 AIM for Climate (AIM4C) is a deliberate ploy to reframe industrial agriculture and big tech as climate change heroes rather than the climate change villains that they actually are.
Today’s launch of the new ‘AIM for Climate’ initiative by President Joe Biden and the United Arab Emirates, supported by the UK Government and others [1], at the World Leaders Summit innovation event [2], is deliberately intended to reframe agribusiness and tech corporations as part of the solution to climate change, thereby propping up industrial agriculture. It comes as Ag giants such as Bayer, John Deere and Cargill are reinventing themselves as ‘ag-tech’. Big data companies like Microsoft and Amazon’s AWS are also moving rapidly into the digital agriculture frame [3].
The ‘Net Zero’ trap, which is today challenged by over 700 civil society organisations in Glasgow and around the world [4], is the icing on the cake for a new pitch being made by Big Ag and Big Tech. By presenting AIM4C as a new and 'game-changing solution' to climate change and the future of food they aim to win carbon credits, even for what looks set to be an energy-hungry and seemingly farmer-free form of food production, enabling it to also continue using fossil fuels [5]. The path laid out by AIM4C will distract and delay real climate action, pushing investment in entirely the wrong direction.

“Biden’s ‘gift’ to COP26, AIM4C, is really part of designing future agriculture without farmers. While small farmers, fishers, pastoralists and urban growers feed the majority of the world’s population at the same time as cooling the planet, AIM4C’s website doesn’t even mention farmers at all.” said ETC Group’s Coordinator, Neth Daño [6]

AIM4C could also be a poisoned arrow for food policy – shot in entirely the wrong direction – towards increased energy use and strengthening the very industrial food chain that is harming the climate. If successful, AIM4C could take out the smallholder and peasant farmers who really feed and cool the world through agroecological farming.

“With AIM4C, Joe Biden, the UAE, the UK and others are putting a target on farmers’ backs with a view to replacing them with robots, data, gene-edited seeds and boosted tech profits for the Silicon Valley set” added Jim Thomas, ETC Group’s Research Director.

What we need is to support and uphold peasant and smallholder agroecology around the world, which is a real and equitable means of promoting food sovereignty and climate justice for all.
Contacts:
Tom Wakeford (in Glasgow), Tel/Signal: +44 7966170713, Email: tom@etcgroup.org

Footnotes
[1] AIM for Climate (aimforclimate.org) is led by the US and UAE, with the support of the UK COP26 Presidency, some 32 other countries, the Bill and Melinda Gates Foundation and the Food and Agriculture Organization.

[3] To find out more about digitalisation in agriculture read: “Hijacking Food Systems: technofix takeover at the FSS” by ETC Group.

[4] Today also sees the launch of a major new statement from civil society around the world, challenging the Net Zero concept. “Real Solutions, Not Net Zero” has so far been signed by over 700 civil society organisations around the world. Track #NetZeroIsNotZero for further developments during COP26.

[5] To find out more about AIM for Climate and the motivations of countries like the US and UAE read “As big oil states plan to promote energy-hungry agtech as a ‘climate solution’ at COP26, it’s time to question their aim” by ETC Group.

[6] On BBC’s Farming Today programme this morning (2 November) the Bill and Melinda Gates Foundation’s Laura Burke claimed that agtech is the way out of climate change for smallholder farmers: in Africa, Asia, Latin America, Pacific, Europe, everywhere in fact (https://www.bbc.co.uk/sounds/play/m00114j7 (starts at 09:45)). This seems to contradict the AIM for Climate website where we have so far failed to find the words ‘farmer’ or ‘farmers’ on any of its main website pages. Instead, the focus is squarely on raising investment in agricultural research and innovation.