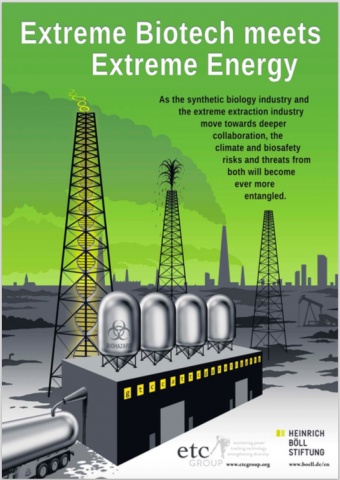 Paris, 24th November 2015 - At the upcoming Climate summit in Paris, some governments and much of civil society will be pushing for an urgent transition away from the carbon-rich fossil fuels responsible for climate chaos. However, one hi-tech sector, the multi-billion dollar Synthetic Biology industry, is now actively tying its future to the very oil, coal and gas extraction it once claimed to be able to displace. That’s the conclusion of a new report released jointly today from the ETC Group and Heinrich Böll Foundation. Titled “Extreme Biotech meets Extreme Energy”, the report predicts that as the extreme biotech industry and the extreme extraction industry move towards deeper collaboration, the biosafety risks and climate threats emanating from them will become ever more entangled.

Synthetic Biology (or Syn Bio) describes a set of new and emerging genetic engineering techniques and is also the name for a surging young industry that is designing and engineering life-forms from scratch for industrial purposes. The first round of synthetic biology companies sold themselves to investors on the promise of a ‘clean green’ industry that would replace fossil fuels with biofuels and bioplastics made from sugar and cellulose. However, Syn Bio industry leaders are now retooling their companies explicitly in order to serve the petrochemical industry and to increase the value and flow of fossil minerals from the frackfields and oilfields to commercial markets.

“Only five years ago Syn Bio industry CEOs were posturing that they would bring about a sugar-based bioeconomy that would do away with dirty fossil fuels” explains Jim Thomas, Programme Director with ETC Group. “Now those same CEOs are restructuring their operations to prop up the oil and gas majors and their green promises are melting along with the ice sheets.”

“Climate activists, policymakers and the public should be concerned about this unholy alliance between the gene-jiggers and the oil riggers, between corporate bio-hackers and the gas-frackers” said Lili Fuhr of Heinrich Böll Foundation, “The fossil fuel industry’s desperate quest for carbon profits keeps going deeper into riskier territory - now they are adding biosafety risks to the already long list of extractive industry risks”.

-       Details of a dozen private companies and a US Government Programme developing synthetically engineered “methanotroph” microbes that transform natural gas (methane) into fuels, chemicals and foods, using techniques such as “gaseous fermentation”.

-       Analysis of fossil industry agendas to use Syn Bio to capture so-called “stranded gas”, that would increase recoverable gas reserves by 40-60% and may drive up the market value of fracked and captured gas.

“At next week’s climate negotiations in Paris the oil and gas industry will attempt to secure political support for turning ‘stranded’ gas into liquid fuels even though that may in fact increase climate risks.” warned Silvia Ribeiro, ETC Group’s Latin American Director, en route to Paris, “They will dress up this use of engineered microbes as ‘Carbon Capture Use and Storage’ (CCUS) - a false solution and a dangerous distraction”.

Additionally, ETC Group and Heinrich Böll Foundation are today also releasing new language versions of a ten-minute animated introduction to Synthetic Biology. Titled “What is Synthetic Biology? Engineering life and livelihoods” this short explainer cartoon, drawn by award-winning Canadian animator Marie-Josée Saint-Pierre and produced by documentary filmmaker Jocelyne Clarke was previously only available in English but is now available in French, Spanish, Portuguese and German. The new language versions can be viewed at http://www.etcgroup.org/content/video-animation-synthetic-biology-5-languages.

-       ETC Group will be co-organising the following events in Paris during COP21 of the UNFCCC:

From "Net-Zero" Emissions to Geoengineering: a deadly trap for the planet