Synthetic Biology: The Bioeconomy of Landlessness and Hunger 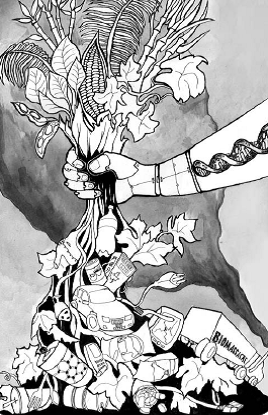 For the full briefing please download the PDF file.

Synthetic biology represents a quantum advance on biotechnology, and goes beyond transferring genes between species to constructing entirely new, self-replicating microorganisms that have the potential (partially proven / partially theoretical) to convert any biomass or carbon feedstock into any product that can be produced by fossil carbons – plus many more. In other words, from the perspective of synthetic biology (“synbio”), the resource base for the development of marketable “renewable” materials (that is not from petroleum) is not the world’s commercialized 23.8 % of annual terrestrial biomass, but also the other 76.2 % of annual terrestrial biomass that has, thus far, remained outside the market economy.[i]

Synthetic biology has already attracted the attention of the United Nations and governments. The technology was on the agenda of the UN Convention on Biological Diversity that met in Hyderabad, India in mid-October 2012, with governments agreeing to continue monitoring the technology and report back to future meetings of the CBD.[ii]

At first blush, a new manufacturing platform built on “re-programming” life forms sounds like the stuff of science fiction and far removed from the realities of agriculture in the global South. However – like previous revolutions in agriculture and manufacturing – the Northern-bred synbio industry is shifting the economic picture for farmers in the South (and at greater speed), driving a new wave of land grabs (for biomass) and competing head to head with the naturally sourced commodities that Southern economies have relied on for decades or even centuries. As well as driving the biomass grab, it is increasing the economic value of natural gas through controversial ‘fracking’ processes: synthetic microbes are now being re-tooled to use natural gas as their carbon source.[iii]

Synthetic biology by the numbers

In 2012, the synthetic biology industry evolved into a global, well-financed and rapidly expanding sector with products already in the marketplace and many more in the pipeline over the next two to three years.

[ii] Decision UNEP/CBD/COP/DEC/XI/11 paragraphs 3 and 4; 5 December 2012, “Decision Adopted By The Conference Of The Parties To The Convention On Biological Diversity At Its Eleventh Meeting, XI/11. New And Emerging Issues Relating To The Conservation And Sustainable Use Of Biodiversity:” http://www.cbd.int/cop11/.

[ix] see page 13, International Civil Society Working Group on Synthetic Biology “A Submission to the Convention on Biological Diversity’s Subsidiary Body on Scientific, Technical and Technological Advice (SBSTTA) on the Potential Impacts of Synthetic Biology on the Conservation and Sustainable Use of Biodiversity” October 2011 –online at http://www.cbd.int/doc/emerging-issues/int-civil-soc-wg-synthetic-biolog...