Video Animation Explores Risks of Treating Life as a Machine 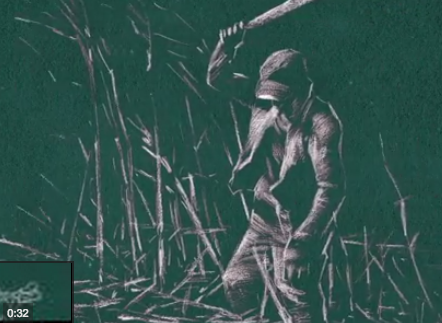 MONTREAL, 29 Oct. 2014–On the eve of the largest annual gathering of synthetic biologists in the world, ETC Group and the Bioeconomies Media Project are launching a new animated explanation of the workings of this emerging “SynBio” industry, often dubbed extreme genetic engineering. Thousands of scientists, students and vendors will converge at the International Genetically Engineered Machines (iGEM) Jamboree in Boston to share the latest advancements in what has become a multi billion dollar industry based on the industrialization of life at the molecular level.
Increasingly, scientists and civil society are sounding the alarm about the risks posed by unregulated commercialization of SynBio’s untested, experimental and unprecedented manipulation of life forms. The new ten minute video, produced in collaboration with award-winning Canadian animator Marie-Josée Saint-Pierre and narrated by ETC’s Jim Thomas, is the first output from a new Bioeconomies Media Project. Featuring work of researchers from Canadian universities and funded by the Canadian Social Sciences and Humanities Research Council, the video provides a succinct introduction to the science and emerging industry of synthetic biology as well as some of the ethical, biosafety and economic impacts that these "genetically engineered machines" may have.
"The synthetic biology industry is already a multibillion dollar enterprise involving some of the worlds largest food, chemical and agribusiness companies," said Jim Thomas, ETC's Programme Director. "The leaders of that industry are targeting markets supplied by small farmers in the around the world; this is likely to have real negative impacts on poorer communities in the global south."
SynBio companies have commercialized several products already, including a vanilla substitute grown by synthetically modified yeast, a coconut oil replacement produced by engineered algae, and engineered versions of patchouli and vetiver fragrances. Less than two weeks ago, 194 nations at the United Nations convention on Biological Diversity unanimously urged governments to establish precautionary regulations and to assess synthetic biology organisms, components and products. Many countries had called for a complete global moratorium on the release of synthetic biology organisms.
"Small farmers feed over 70% of the world; if SynBio companies cut into the tiny profits they are able to make, it could have a growing negative impact on the world's food supply," Thomas added. "Given how little we know about the potential effects of these highly novel life forms, there are also concerns about the risk of synthetic microorganisms escaping into the air and water."
The video released today features the work of Montreal-based animator Marie-Josée Saint-Pierre, who has dozens of film festival awards to her name, most recently for Best Short Documentary at the Saint Louis International Film Festival in 2012. Saint Pierre’s last animation was featured at the most recent Cannes International Film Festival.
"Since I started working on this video, I've learned that synthetic biology is quite dangerous, and without regulations it can have repercussions for workers and farmers," said Saint-Pierre. "It was important for me to make something that’s easy to understand, so that anyone can access information about SynBio and process it."
The video can be viewed at the following locations:
http://www.synbiowatch.org/2014/10/synthetic_biology_explained/
http://www.etcgroup.org/synthetic_biology_explained
https://www.youtube.com/watch?v=C726wUGLdL4
For for information, please contact:
Jim Thomas, jim@etcgroup.org  phone 1 514 516 5759
Dru Oja Jay, dru@etcgroup.org  phone 1 438 930 4693
Related Issues:
Synthetic Biology
Genomics & Biotechnology
The Bioeconomy
Related Fora:
Biodiversity: CBD, SBSTTA, IPBES