Who Will Control the Green Economy?

Corporate Concentration in the Life Industries 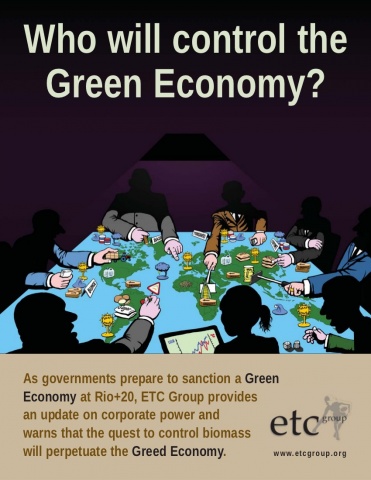 Who Will Control the Green Economy?

Will a “great green technological transformation” bring about a “green economy” to help us save ourselves and our planet? Or will it serve those already controlling today’s “greed economy?” In its new report, ETC Group provides a snapshot of the state of corporate control in more than a dozen economic sectors relevant to the green economy (including seeds, energy, bioinformatics and food) and argues that in the absence of effective and socially responsive governance, the green economy will spur even greater convergence of corporate power and unleash the most massive resource grab in more than 500 years.

What you will find in the 'Who Will Control the Green Economy?' Report

-  Naming The Green Economy's “One Percent”

'Who Will Control the Green Economy?' provides hard data on the largest and most powerful corporate players controlling 25 sectors of the 'real economy'. This is the only freely available report to assemble top 10 listings of companies (by market share) from 18 major economic sectors relevant to the Green Economy. These lists include the top 10 players in Water, Energy, Seeds, Fishing and Aquaculture, Food Retail and Processing, Chemicals, Fertilizer, Pesticides, Mining, Pharmaceuticals, Biotech, the Grain Trade and more. The report also identifies the leading players in a handful of new and emerging industrial sectors including Synthetic Biology, Big Data, Seaweed and Algae production and Livestock Genetics (pp.1-2).

The 'Green Economy' may evoke iconic images of solar panels and wind turbines but this is not actually where corporate activity is focusing. While non-hydro and non-nuclear 'renewable' energy is only a thin sliver (1.8%) of global energy consumption - almost all of this consists of harvesting and burning biomass for energy and fuels and now chemicals. This report shows how the major corporate realignments in the new 'Green Economy' are happening around plant biomass (p.8-12, 18-21).

Conventional wisdom says the size of the global energy market weighs in at $7 trillion and dwarfs every other economic sector. According to our research, however, the global grocery market ekes out ahead of energy – even when government subsidies paid to producers for energy and agriculture are taken into account (p.37).

In the early 1990's the early commercialization of genetic engineering technologies drove massive reorganization of the seed, agrochemicals and pharmaceutical sectors and the emergence of 'life science' giants such as Monsanto and Novartis. Today the new technologies of Synthetic Biology are spurring another frenzy of mergers, acquisitions and joint ventures around the biomass economy drawing large energy and chemical players such as Dow, DuPont, BP, Shell, Exxon, Chevron and Total into new alliances with grain, forestry and seed giants such as Monsanto, Cargill, Bunge, Weyerhaeuser and ADM. At the heart of these new alliances are surprisingly new Synthetic Biology companies such as Life Technologies Inc, Amyris, Solazyme and Evolva – all rapidly being promoted to significant roles in the global food, energy, pharma and chemicals sectors (pp.8-12).

-   Controlling the Blue Economy too.

Biomass found in oceans and aquatic ecosystems accounts for 71% of the planet’s surface area. That’s why energy and chemical corporations such as Du Pont, Statoil , DSM, Exxon, Mitsubishi, Monsanto , Chevron and shipping giant Stolt Nielsen are looking to the wild, wet frontier for new sugars and oils to fuel the bio-based economy, proposing the large-scale exploitation of algae, seaweed, fish and all the aquatic biomass found in lakes, rivers and coastal estuaries.  (Pp. 18-21)